A detailed general description of protective elements visible in daylight, with illustrative examples of individual elements on the 1000 CZK note, 1996 version 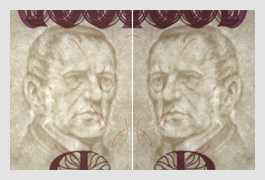 The windowed thread is a strip of metallic plastic embedded into the paper of the banknote. On the banknote’s face side it protrudes in six places from the surface. These “windows” of silvery colour are each 5 mm long and bear a readable negative microtext indicating the banknote’s nominal value. When the banknote is viewed, only the protruding part of the strip on the face side is visible. When viewed against the light, the whole strip is visible on both sides as a continuous dark line with the microtext “1000 Kč” showing through. 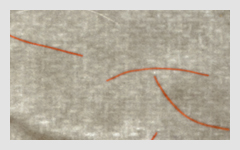 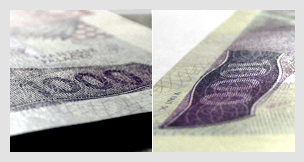 This protective element is based on an optical effect. The colour of the linden leaf printed with special ink changes depending on the position of the banknote when held against incidental light. The colour normally visible on the face side of the note changes colour from gold to green when the note is tipped against the light. 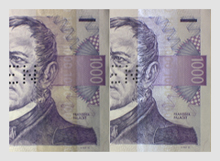 The iridescent strip is about 20 mm wide and located on the face side close to the right-hand margin of the banknote. It is straight and monochrome. At first glance, it seems to be transparent with a slight ochre hue. When the banknote is tipped against the light, the strip gains a slight violet hue with a metallic reflection. Negative (i.e. light) figures 1000 are on the iridescent strip to the right. When the banknote is tipped, the figures appear dark on the glossy strip. 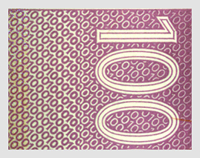 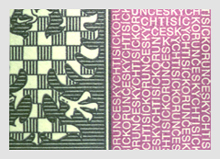 The microtext is printed in both offset and intaglio printing. Microtext in the form of figures indicating the banknote’s denomination creates the outline of the large denomination figure on the face side and is also located in the strip of basic colour near the right-hand white margin of the banknote to the right of the portrait. On the reverse side, microtext is also concealed in the strip of basic colour between the state symbol and the right-hand margin, consisting of words indicating the denomination. The microtext initials of František Palacký are located in the middle next to the large words indicating the denomination on the face side and in a decoration below the state symbol on the reverse side.