A detailed general description of protective elements visible in daylight, with illustrative examples of individual elements on the 100 CZK note, 1997 version 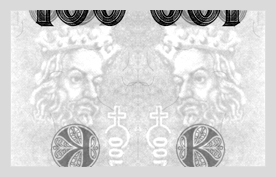 The windowed thread is a strip of metallic plastic embedded into the paper of the banknote. On the banknote’s face side it protrudes from the surface in segments 5 mm apart. These “windows” of silvery colour are each 5 mm long and bear a readable negative microtext indicating the banknote’s nominal value. When the banknote is viewed, only the protruding part of the strip on the face side is visible. When viewed against the light, the whole strip is visible on both sides as a continuous dark line with the microtext “100 Kč” showing through.

On each side of the banknote only a portion of this mark is visible. The complete mark, with precisely matching individual lines, is visible when the banknote is viewed against the light. The front-to-back register is a circular mark created by the letter “C”, with an interposed letter “S” for the 1995 version, and by a similarly composed pair of letters “ČR” for the 1997 version. 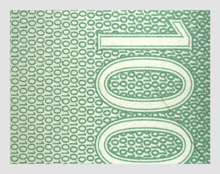 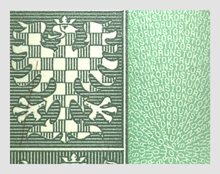 Printed in offset printing. The basic microtext is concealed in the strip of basic colour near the right-hand white margin to the right of the portrait on the face side, consisting of figures indicating the banknote’s denomination. On the reverse side, microtext is also concealed in the strip of basic colour between the state symbol and the right-hand margin, consisting of words indicating the banknote’s denomination.