Simultaneously with the publication of the 2022 Q2 balance of payments figures, revised data for 2022 Q1 are being published. The revised data mainly take into account updated CZSO data on exports and imports of goods and services and, on the financial account, data from statements submitted to the CNB by financial and non-financial entities.

The current account ended 2022 Q2 in a deficit of CZK 72.7 billion. The financial account recorded an inflow of funds (net borrowing) of CZK 101.6 billion owing mainly to a decline in external assets. Reserve assets decreased by CZK 95.5 billion (adjusted for valuation differences). The current account deficit was 3.5% of GDP and the goods and services surplus was 0.4% of GDP on an annual basis.

Ratio of Current Account and Goods and Services Balance to GDP
(CZK billions, right-hand scale in %) 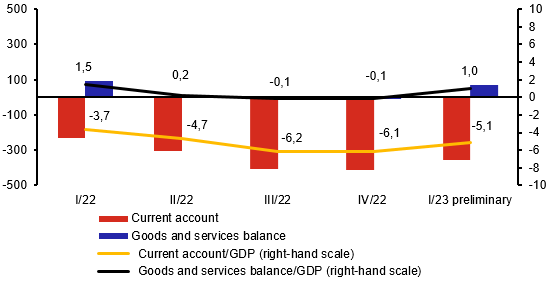 The goods and services balance ended Q2 in a deficit of CZK 4.5 billion. The deficit deteriorated by CZK 77.6 billion year on year due to goods imports rising faster than exports. The goods balance recorded a deficit of CZK 40.1 billion, a year-on-year deterioration of CZK 81.1 billion. The services balance ended in a surplus of CZK 35.6 billion, which represents a year-on-year improvement of CZK 3.6 billion. As regards the structure of the services balance, the foreign travel balance recorded growth in turnover compared with the same period last year and ended in a surplus of CZK 4.6 billion. A particular increase was also recorded for exports of telecommunication services, and research and development. The total goods and services turnover at current prices grew by 16.2% year on year in Q2 amid an increase in exports and imports of CZK 141.6 billion and CZK 219.1 billion respectively.

The primary income deficit was CZK 62 billion in Q2. The year-on-year increase in the deficit of CZK 6 billion was due to a decrease in net income from the EU budget recorded under primary income and a deterioration in the interest balance due to higher interest paid abroad.

The secondary income balance recorded a deficit of CZK 6.3 billion in Q2, a deterioration of CZK 9.1 billion from a year earlier. The increase in the deficit was due mainly to a higher decrease in net income from the EU budget recorded under secondary income.

The capital account recorded a surplus of CZK 11.4 billion in Q2. The year-on-year decrease in the surplus of CZK 12.7 billion was due to a deficit on trading in emission permits and capital transfers.

The financial account (including the change in the CNB’s reserve assets) saw a net inflow (net borrowing) of CZK 101.6 billion in Q2 owing to external assets dropping and liabilities simultaneously rising. 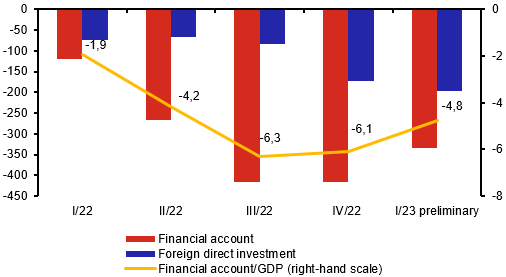 Under foreign direct investment, a net inflow of CZK 39.6 billion was recorded. The main factors on the liabilities side were equity capital increases in domestic companies in the form of reinvestment of earnings by foreign owners and drawdown of loans from affiliated companies.

Portfolio investment saw a net outflow (net lending) of CZK 254.8 billion. This was due to a decline in bank and government bonds held by non-residents, with liabilities falling by CZK 276.1 billion. Assets dropped by CZK 21.3 billion due to a decrease in holdings of foreign shares and bonds by domestic investors.

Other investment saw an inflow of funds (net borrowing) of CZK 195.8 billion.

This was due primarily to a change in the short-term position of banks, mainly as a result of an increase in deposits and loans accepted from abroad. The net inflow (including the CNB and excluding reserve assets) was CZK 142.1 billion.

The government sector saw drawings of loans from abroad and a net inflow of CZK 91.5 billion.

Other sectors recorded a decrease in liabilities amid an increase in external assets and a net outflow of CZK 37.8 billion.

The CNB’s own operations (foreign exchange interventions) and transactions for CNB clients resulted in a decrease in the international reserves of CZK 95.5 billion (adjusted for valuation differences).