Gold coin to mark the 1,150th anniversary of the arrival of the missionaries Constantine and Methodius 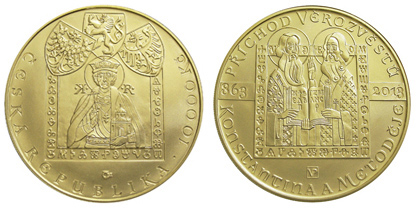 On 3 July 2013. the Czech National Bank is putting into circulation a gold coin to mark the 1,150th anniversary of the arrival of the missionaries Constantine and Methodius in Great Moravia. The coin is minted from 999.9 purity gold and is issued in two versions, normal quality and proof quality, which differ in surface treatment and edge marking. Proof-quality coins have a highly polished field, a matt relief and a plain edge. A small number of coins, donated by the Czech National Bank to prominent personalities of our churches and distributed only at the presentation of the coin on 4 July 2013 in Velehrad, have a plain edge with the inscription “2013 - ROK ZVOLENÍ PAPEŽE FRANTIŠKA”. Normal quality coins have milled edges. The coin is 34 mm in diameter, weighs 31.107 g and is 2.5 mm thick. Deviations in diameter of 0.1 mm and thickness of 0.15 mm are allowed. Upward deviations in weight of 0.062 g and in gold content of 0.01% are permitted.