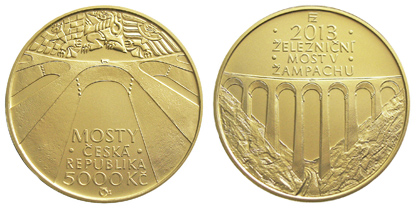 On 8 October 2013 the Czech National Bank is putting into circulation the sixth gold commemorative coin from the Bridges cycle. Its motif is the railway bridge in Žampach near Jílové, which is the highest stone bridge in the Czech Republic. The coin is minted from 999.9 purity gold and is issued in two versions, normal quality and proof quality, which differ in surface treatment and edge marking. Proof-quality coins have a highly polished field, a matt relief and a plain edge, while normal-quality coins have milled edges. Normal quality coins have milled edges. The coin is 28 mm in diameter, weighs 15.55 g and is 2 mm thick. Deviations in diameter of 0.1 mm and thickness of 0.15 mm are allowed. Upward deviations in weight of 0.062 g and in gold content of 0.01% are allowed.

The obverse side of the coin features several arches of the railway bridge in Žampach viewed from below. There is a composition of heraldic animals from the large national emblem of the Czech Republic above the bridge arches – the Czech lion in the middle, the Silesian eagle to the right and the Moravian eagle to the left. The name of the cycle "MOSTY", the name the state in Czech “ČESKÁ REPUBLIKA” and the denomination and abbreviated monetary unit “5000 Kč” are written on four lines inside the middle arch. The coin was minted by the Czech Mint. Its mark, in the form of the letters “Č” and “M”, is located near the lower edge of the coin. The reverse side of the coin depicts an overall view of the railway bridge in Žampach set in the surrounding countryside. The year of mintage "2013" and the text "ŽELEZNIČNÍ MOST V ŽAMPACHU" are located on four lines above the bridge. The coin was designed by the sculptor Zbyněk Fojtů. His initials, in the form of the interlinked letters “FZ”, are situated near the upper edge of the coin.