100th anniversary of the introduction of the Czechoslovak koruna 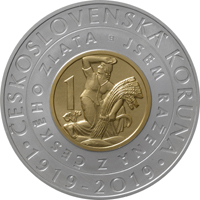 The obverse side of the coin features a partial portrait of Alois Rašín in the form of a banknote engraving. Written in a ring around the outer circle is the name of the state ““ČESKÁ REPUBLIKA” and the denomination and abbreviated monetary unit “2 000 Kč”. The name of the state and the denomination and abbreviated monetary unit are separated by a dot on the left and by the mark of the Czech Mint, in the form of the letters “Č” and “M”, on the right. The reverse side features the reverse side of the first Czechoslovak koruna coin, dating from 1922, in the gold inlay in the middle. Written around the outer silver circle is the text “ČESKOSLOVENSKÁ KORUNA” and the years “1919-2019”. The text and the years are separated by dots. Written between the gold inlay and the outer circle is the text “JSEM RAŽENA Z ČESKÉHO ZLATA”. The initial of the designer of the coin, Jiří Hanuš, in the form of the letter “H” in a frame, is situated before the word “JSEM”.

Each coin comes with a blue catalogue card containing a description and the relief of the coin.