The current account surplus amounted to CZK 16.4 billion in August. Dividends paid on direct investment account for CZK 4.9 billion in the primary income balance on the liabilities side. The balance of goods and services showed a surplus of CZK 24.7 billion. Primary and secondary income included a surplus of CZK 1.2 billion on transfers from the EU budget to the Czech Republic. On the capital account, income from the EU budget amounted to CZK 0.4 billion. 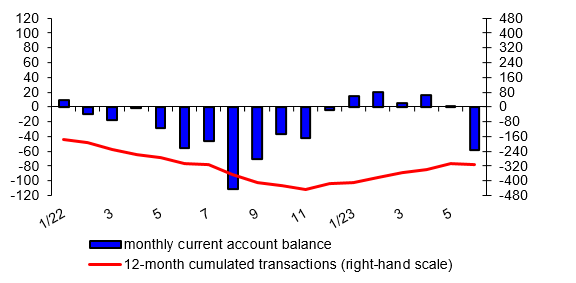 The outflow of capital on the financial account (net lending) totalled CZK 26.6 billion owing to a decline in liabilities and a rise in assets. The net inflow of foreign direct investment was CZK 1.6 billion, of which estimated reinvested earnings were CZK 0.9 billion. The inflow of portfolio investment of CZK 31.9 billion (net borrowing) was associated on the liabilities side with an increase in holdings of banks’ debt securities by non-residents. 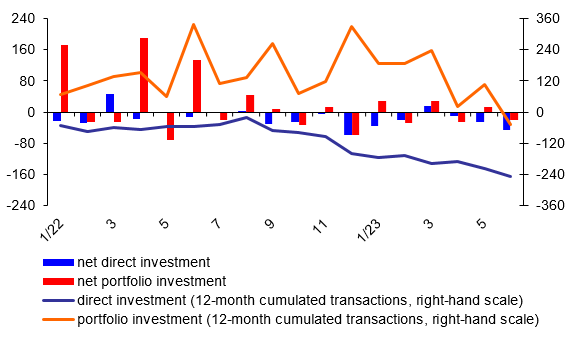 Other investment recorded an outflow of capital (net lending) of CZK 56.8 billion. The outflow in other capital was due primarily to a change in the banking sector’s short-term international position. Transactions for CNB clients resulted in an increase in the CNB’s international reserves of CZK 3.7 billion (adjusted for valuation changes).