US protectionist measures and their impact on world trade

The USA has adopted a series of protectionist trade measures in 2018. According to the USA, the shift towards protectionism was motivated by tariffs on US imports being lower than those on US exports elsewhere in the world and by unfair practices of its trading partners. In the case of China, the dispute also concerned insufficient protection of intellectual property and the fact that US firms are not allowed to gain a majority share in joint ventures. According to President Trump, the USA’s unequal position in international trade was causing its current account deficit to rise. Following a series of unsuccessful talks with its partners, the USA rolled out tariffs on a whole range of products (see Table 1).

a) Argentina, Australia, Brazil and Korea are exempt.
b) On 11 July 2018, President Trump asked the US Trade Representative to prepare 10% tariffs on imports from China totalling USD 200 billion.

The USA’s unilateral action led to an escalation of trade disputes, in particular with China. The USA’s first step was to put tariffs on imports of solar panels and washing machines, especially those from China and other South-East Asian countries. In March, it introduced import tariffs on steel and aluminium (and other Chinese products). China responded in early April with tariffs on imports of selected US goods (soy beans, cars, chemicals, etc.). In mid-May, China offered a package of measures aimed at reducing the US trade deficit with China by up to USD 200 billion, including the lifting of some tariffs on US agricultural products, but the two sides failed to agree. On the contrary, the USA imposed further tariffs on goods imports of up to USD 50 billion a year. China reciprocated with tariffs on imports of selected US products (soy, beef, etc.). President Trump then repeated he was ready to impose tariffs on USD 550 billion worth of goods, i.e. more than total US imports from China last year (USD 506 billion). The USA is now preparing 10% tariffs on imports from China of USD 200 billion with effect from September. For the first time, the tariffs will apply to consumer goods such as handbags and digital cameras.

The current measures have had limited impacts on countries other than China, but a series of retaliatory measures have been taken. The existing US measures against all trading partners have been limited in size so far (applying to less than 3% of total US imports). The most important item is tariffs on imports of steel and aluminium, but they account for less than 4% of the total exports of its main trading partners (Mexico and Canada).1 Several countries have responded to the protectionist measures with retaliatory tariffs on imports of US goods (see Table 2). Canada, the EU and Mexico account for the largest volumes of imports affected.

Tariffs on imports of cars and auto parts could have a greater impact on trade. President Trump has threatened such tariffs in reaction to the retaliatory measures described above. Tariffs of 25% would be imposed on cars from all countries and on trucks from NAFTA countries. The volume of imports (excluding parts) subject to the tariffs would be almost 9% of all US imports (see Table 1). Mexico, the EU, Canada and Japan would be the hardest-hit trading partners (see Chart 1), with the impact relative to the size of the exporting economy being particularly significant for Mexico. The tariffs would affect about one-third of total car exports from the EU. Moreover, global chains in the auto industry need to be taken into account when assessing the impacts. Up to a half of the cars Toyota and Honda sell in the USA are produced there, whereas most VW Group, BMW and Daimler cars are actually imported. The question is whether producers will respond by reallocating production and/or focusing on exports in the higher-class segment, which is less sensitive to price movements. From the EU perspective, Germany is likely to be hardest hit, with losses running to EUR 5 billion, or 0.16% of German GDP, according to Ifo estimates. 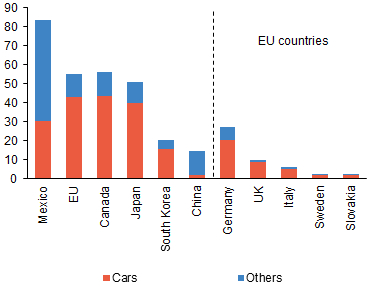 The USA’s future actions are hard to predict, but a further escalation of the trade disputes would have a sizeable impact on global activity. In addition, the protectionist tendencies and growing trade disputes are causing an increase in financial market uncertainty and, in turn, sudden capital outflows. Many countries have already had to face such situations in recent months. The higher import prices caused by the retaliatory measures are being accompanied by a weakening of the currencies of the countries concerned, causing inflation pressures to rise substantially. The protectionist measures may also lead to the introduction of non-tariff barriers or regulatory measures affecting foreign branches of US firms specialising in innovation. Protectionism may thus reduce technology spillovers in the global economy. On the other hand, the EU has managed to sign a free trade agreement with Japan, and negotiations in the same vein are continuing with China.

1 In the case of the Czech Republic, exports of steel and aluminium made up about 2.4% of total exports to the USA in 2017.