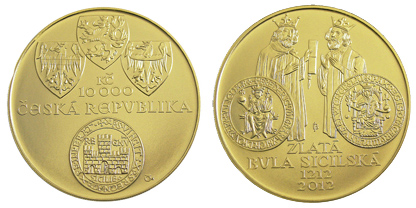 On 26 September 2012, the Czech National Bank is putting into circulation a CZK 10,000 gold coin to mark the 800th anniversary of the issuance of one of the most important documents of our Medieval history, the Golden Bull of Sicily. The coins are minted from 999.9 purity gold and are issued in two versions, normal quality and proof quality, which differ in surface treatment and edge marking. Proof-quality coins have a highly polished field, a matt relief and a plain edge. Normal quality coins have milled edges. The coin is 34 mm in diameter, weighs 31.107 g and is 2.55 mm thick. Deviations in diameter of 0.1 mm and thickness of 0.15 mm are allowed. Upward deviations in weight of 0.062 g and in gold content of 0.01% are permitted.

The obverse side of the coin contains a composition of heraldic animals from the large national emblem in stylised Gothic form located in shields – the Czech lion in the middle of the upper part, the Silesian eagle to its right and the Moravian eagle to its left. The denomination and abbreviated monetary unit “Kč 10,000” and the name of the state “ČESKÁ REPUBLIKA” are below the composition. The obverse side of the seal of Frederick II as the King of Sicily is depicted below the texts. The coin was minted by the Czech Mint. Its mark, in the form of the letters “Č” and “M”, is to the right of the seal. The reverse side of the coin features a stylised depiction of the handing over of the Golden Bull of Sicily. On the left, the Roman-German and Sicilian king Frederick II is shown handing over the Golden Bull of Sicily to the Czech king Přemysl Otakar I. The seals of the rulers are depicted across their portraits. The text “ZLATÁ BULA SICILSKÁ” and the years “1212 – 2012” are located below the depictions of the rulers. The coin was designed by Jaroslav Bejvl. His initials, in the form of the letters “J” and “B”, are located between the portraits of the rulers.