Graph of Risks to the Inflation Projection (GRIP)

In the context of this year’s unprecedented economic developments, the risks to the Inflation Report III/2020 forecast stemming from the newly available macroeconomic data and captured in the GRIP simulation can be assessed as being individually relatively moderate and balanced overall. The evolution of the domestic real economy, mainly reflecting somewhat faster than expected average wage growth in Q2, is acting towards slightly higher domestic interest rates and inflation in the simulation. The on average still slightly stronger exchange rate of the koruna against the euro, and especially developments abroad, which mainly reflect a lower outlook for foreign producer prices next year, are acting in the opposite direction. The forecast for domestic interest rates and inflation is materialising and these points thus have a broadly neutral effect in the simulation. To sum up, the baseline scenario of the current forecast is materialising fairly well so far.

Outside the GRIP simulation, there is significant risk associated with the currently worsening epidemiological situation in many countries, including the Czech Republic. Owing to the high economic costs of the across-the-board restrictive measures introduced in the spring phase of the pandemic, governments of individual countries are trying to stabilise the current situation using targeted restrictions with generally only small economic impacts so far. However, the possibility of the re-introduction of more extensive or across-the-board quarantine measures and closures of some sectors in the forthcoming colder part of the year poses the most pronounced risk to the Inflation Report III/2020 forecast – towards lower domestic economic activity. Conversely, the currently planned additional budgetary measures may lead overall to a less negative fiscal impulse next year. This would have the opposite effect on the economy. The composition of the supply and demand factors underlying the observed evolution of domestic inflation remains an uncertainty.

After taking these facts into account, the Monetary Department assesses the risks to the Inflation Report III/2020 forecast as remaining substantial, with the current evolution of the domestic epidemiological situation increasing the uncertainty regarding future economic developments. 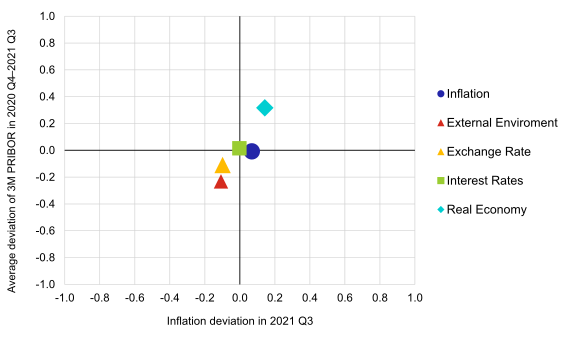