The Czech National Bank is putting into circulation a new version of the CZK 5000 banknote. Its issuance is part of a long-term programme to improve the protection of Czech banknotes against counterfeiting.

The Czech National Bank will put the new version of the highest denomination of the current series of Czech banknotes into circulation on 1 December 2009. The new banknote’s protective elements have been upgraded by comparison with the older versions. “Taking care of money circulation and its security is one the main priorities of the Czech National Bank. The new protective elements of the CZK 5000 banknote are at the global cutting edge,” says member of the Bank Board and Chief Executive Director of the CNB Pavel Řežábek.

“By modifying the CZK 5000 banknote the CNB is building on innovative steps carried out between 2007 and 2009 in respect of the CZK 500, CZK 1000 and CZK 2000 banknotes. By taking this step we are enhancing the protection of Czech currency,” concludes CNB Bank Board member Pavel Řežábek.

The new banknote is again based on a design by Oldřich Kulhánek. Its dimensions and basic parameters are the same as for the previous version of the CZK 5000 banknote. The enhanced protection against counterfeiting includes changes to existing protective elements, the addition of new ones and other design alterations.

The first group of enhanced protective elements enables the general public to detect counterfeits more easily. In particular, it includes a new type of security windowed thread, which is wider than before. The negative microtext indicating the nominal value is complemented with the CNB logo and is larger and more legible. The new security windowed thread is also characterised by its metallic colour, which changes from green to puce depending on the angle at which light falls on the banknote. Against the light, a light “5000 Kč” is visible next to the existing stepped watermark consisting of a portrait of Tomáš Garrigue Masaryk, accompanied by an ornament in the form of a sitting eagle.

Other enhanced protective elements are accessible to cash handling professionals equipped with UV lamps. The reaction of the inks used to print the new version of the banknote to UV light is much richer than on the existing versions.

The banknotes also feature other protective elements that can be authenticated using high-performance sorting machines used for cash processing at the CNB, which can thus check whether banknotes circulating in the Czech Republic are genuine. The Czech National Bank does not publish a description and features of these protective elements. 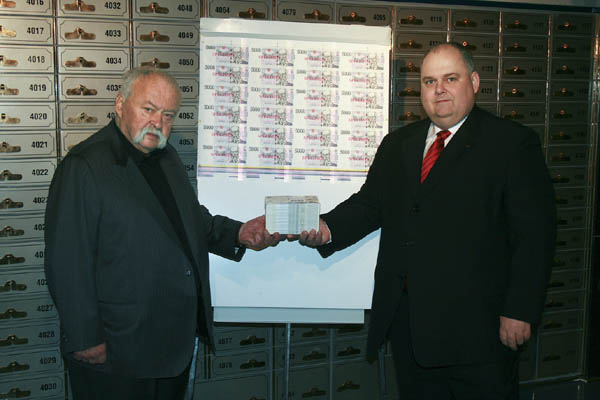