The Czech National Bank has received the International Association of Currency Affairs’ Best New Banknote Award for 2008. The prestigious award went to the new CZK 1,000 banknote with updated security features issued by the central bank in April this year. “I regard this award as confirmation that the quality of our banknotes is at the highest world level in terms of both design and security features,” said Pavel Řežábek, Chief Executive Director and Bank Board Member.

The CNB received the award at the Currency Conference held on 13–15 October 2008 in Prague. This international meeting of central bank representatives, banknote producers and suppliers of materials for banknote production is held every 18 months in various regions of the world. Past organising cities have included San Francisco, Monte Carlo, Hong Kong, New Orleans, Cape Town, Sydney, Barcelona, Honolulu, Rome, Montreal and Bangkok. More than 500 delegates from 80 countries attended the conference. 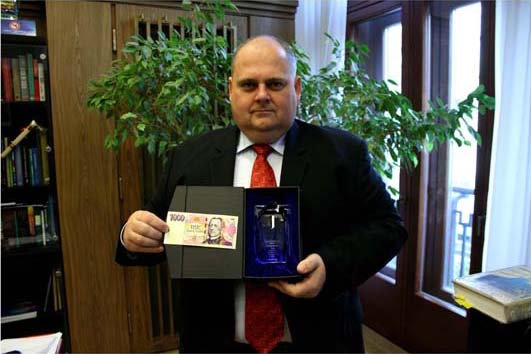 This is the third award to have been conferred on Czech money since the establishment of the independent Czech currency. World Coin News awarded its Best Trade Coin award for 1993 to the then new CZK 50 coin and its Best Gold Coin award for 1999 to the CZK 10,000 coin commemorating the founding of Prague’s New Town by Charles IV.

The best banknotes of 2008 according to the International Association of Currency Affairs were issued by Venezuela; the CZK 1,000 banknote was runner-up together with the 5 and 10 kina notes issued in Papua New Guinea. 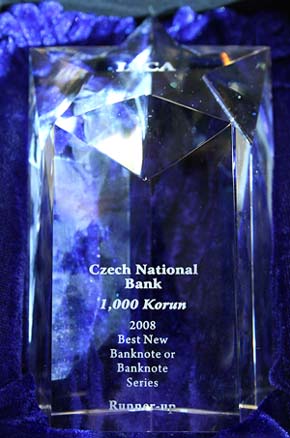