Alignment Analyses 2021 – What shape is the Czech economy in as regards the Czech Republic’s obligation to join the euro area?

Every year, the Analyses of the Czech Republic’s Current Economic Alignment with the Euro Area (Alignment Analyses) presents a long-term and structural view of economic developments in the Czech Republic in the context of the country’s obligation to join the euro area.  It does not examine the overall advantages and disadvantages of adopting the euro and does not formulate recommendations on this step.

In line with The Czech Republic’s Euro-area Accession Strategy, the CNB together with the Czech Ministry of Finance regularly assesses progress in laying the groundwork for euro adoption. The result of this assessment is a joint document Assessment of the Fulfilment of the Maastricht Convergence Criteria and the Degree of Economic Alignment of the Czech Republic with the Euro Area, based on the CNB’s Alignment Analyses. As the government decided last year not to assess the Czech Republic’s fulfilment of the criteria and its degree of alignment with the euro area again until 2022, the CNB and the Ministry of Finance did not publish a joint document this year. The CNB is therefore only publishing its analytical document.

Summary of the conclusions of this year’s Alignment Analyses

Based on the result of this year’s analysis, the characteristics of the Czech economy as regards euro area entry can be divided into three groups:

This group includes the Czech economy’s close trade and ownership links with the euro area and the high degree of its openness, which create preconditions for the benefits of euro adoption. At the same time, strong trade links foster alignment between the Czech and euro area business cycles. It is also reflected in the use of the euro by Czech companies, which has long shown a slight upward trend. As regards the adjustment mechanisms of the Czech economy, despite last year’s swing, the high level of economic activity of the Czech population and the low long-term unemployment rate can be positively assessed. The domestic banking sector, whose capitalisation has increased further over the past year and whose liquidity position stays robust, remains resilient.

2. Indicators with a neutral message

This category primarily includes indicators capturing the similarity of monetary policy transmission in the Czech Republic and the euro area. The Czech Republic differs significantly from the monetary union average in some financial indicators, but this cannot be considered a disadvantage or a fundamental barrier to euro adoption. The convergence of interest rates is also neutral, although its degree has decreased compared to last year due to the start of the domestic monetary policy tightening cycle.

This group includes a still unfinished process of economic convergence of the Czech Republic towards the euro area, especially as regards convergence of the price and wage levels. The lower structural similarity of the Czech economy with the euro area may also pose a risk in the event of euro adoption. The problem with the configuration of the tax and benefit system, which may reduce the incentive to actively seek employment, persists in the Czech labour market. Moreover, the need to stabilise the pandemic-hit economy using fiscal policy tools was reflected in a significant deterioration in the general government balance and an increase in government debt, which has further intensified the persistent problem of Czech public finance sustainability.

As regards measures aimed at the economic recovery of the Member States, the activation of the Recovery and Resilience Plan (especially its Next Generation programme; NGEU) played a key role in 2021. The plan is financed from funds which the European Commission (EC) raises on the financial markets on behalf of the EU through the issuance of EU bonds. The funds are provided to the Member States in the form of grants or loans to meet the goals set out in national recovery and resilience plans.

The need to address urgent challenges has resulted in the continued stagnation of further deepening of euro area integration.  Moreover, discussions on the future functioning of the European Union and the euro area have shown the persistence of fundamental differences of opinion between the individual Member States.

The reform of the euro area and building economic and monetary union are a still unfinished process. The implications of the Czech Republic’s future euro area accession therefore need to be further monitored and carefully assessed. 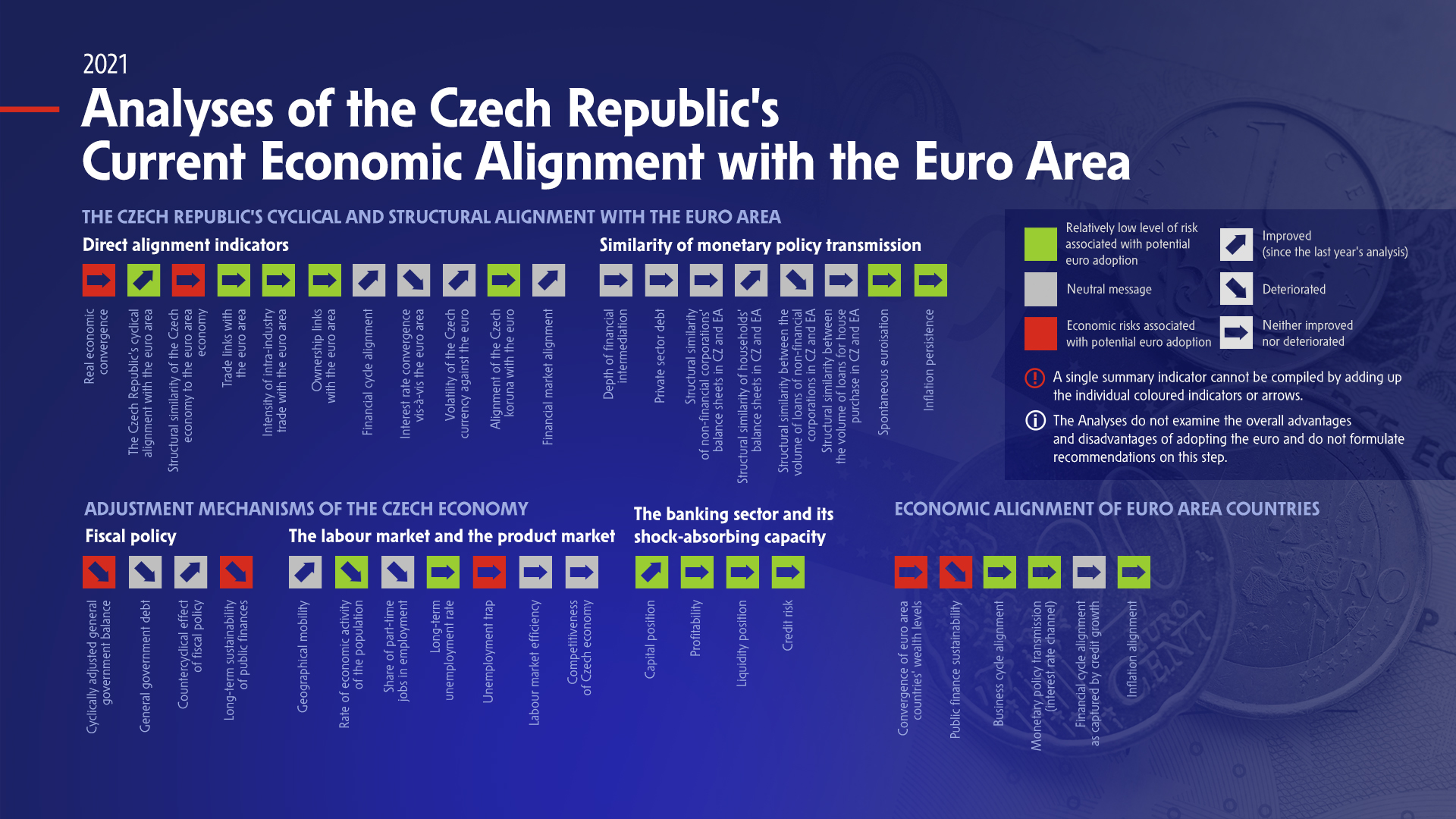