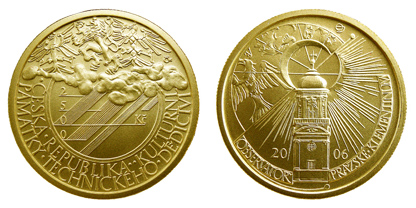 On 11 October 2006, the Czech National Bank is putting into circulation the second gold coin from its Industrial Heritage Sites cycle: “National Heritage Site – Klementinum - Observatory”. The coin is minted in two quality versions differing in surface treatment and edge marking. The normal-quality coins have fields and reliefs of the same polish and milled edges. The proof-quality coins, intended for the most discerning collectors, have highly polished fields, matt reliefs and plain edges. The edge of the normal-quality coin is plain. The normal-quality coins and the proof-quality coins are minted from 999.9 purity gold. The coin has a weight of 7.78 g, a diameter of 2 mm and a thickness of 1.65 mm. Similarly as with any other coins, deviations in diameter of 0.1 mm and thickness of 0.15 mm are allowed. Upward deviations in weight of 0.062 g and the gold content of 0.01% are allowed.

The obverse side of the coin depicts heavy rain falling from baroque stylised clouds. The left-hand edge of the rainfall bears the denomination of the coin “2500” stylised into the lines of a measuring cylinder. Located to the right of this rainfall is the abbreviated monetary unit “Kč”. Situated above the baroque clouds are stylised heraldic animals from the large national coat-of-arms. The ring features the unclosed text “ČESKÁ REPUBLIKA” and the name of the cycle “KULTURNÍ PAMÁTKY TECHNICKÉHO DĚDICTVÍ”. The mark of the Czech Mint is positioned on the right-hand side of the coin above the stylised clouds.

Each coin comes with a red postcard-sized catalogue card. The relief of the coin is dry-stamped through gold foil. The text is given in Czech and English. The card is the same for the normal-quality and proof-quality coins.

The Czech National Bank does not sell its commemorative coins to private individuals directly, but through entities licensed to trade in numismatic material.