Transmission of changes in the nominal exchange rate to domestic prices

Following the exit from the exchange rate commitment, inflation will start to be affected by changes in the exchange rate to an increased extent again. The high degree of openness of the Czech economy implies that a change in the exchange rate has a significant impact on the change in koruna prices of foreign trade. The latter change, however, is usually smaller than the initial exchange rate change. The lower pass-through of the exchange rate to prices is due, for example, to firms’ plans to increase their market share, to the presence of competition, or to hedging and efforts to make sure that revenues and costs are in the same currency.1 In addition to foreign trade prices, which are naturally exposed the most to an exchange rate shock, industrial producer prices and consumer prices respond to exchange rate movements. This is because both price categories contain imported final goods and components subsequently used for the final product or service. In the case of consumer prices, the size of the impact is also reduced by the fact that even seemingly fully tradable goods typically contain a non-tradable part (e.g. storage and distribution costs).2

Chart 1 (BOX)  Model responses of inflation to a 5% depreciation
The rise in inflation in response to a depreciation shock is substantially stronger if the central bank does not respond by changing policy rates
(annual changes in percentage points; horizontal axis = number of quarters; source: Franta et al. (2014): "The exchange rate as an instrument at zero interest rates: The case of the Czech Republic", CNB RPN 3/2014)

The size of the model response for a floating exchange rate regime is comparable to the results of empirical studies. Chart 2 shows the results of an econometric analysis of the transmission of changes in the nominal koruna exchange rate to domestic prices for the period overlapping that of the floating exchange rate until November 2013. These results reveal decreasing pass-through of the exchange rate along the price chain; the impact on consumer prices is less than 10%. A comparison of the Czech Republic with the euro area reveals that Czech import prices respond less strongly to a shock to the nominal effective exchange rate of the domestic currency. Despite quantitative differences, which can be explained by the fact that two different currencies and different trading partner structures are involved, the responses in the two territories are qualitatively similar. 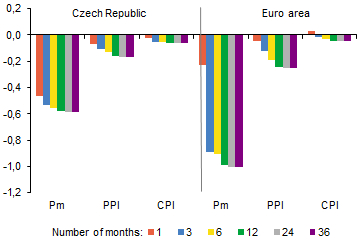 The response to an exchange rate shock in the domestic consumer price index is mixed. Chart 3 shows the results for the individual subcategories. The pass-through is strongest in two price categories: food and transport. Both contain imported goods or goods produced using imported components. They also have a significant weight in the overall index (food accounts for 18% and transport for 10% of the domestic consumer basket ). The exchange rate pass-through to both components is the highest by comparison with the other CPI categories. Moreover, it is stronger in the case of the bilateral exchange rate of the euro than when the nominal effective exchange rate is used.4 The incorrect sign of the estimate of the exchange rate pass-through for clothing and footwear is a statistically insignificant result.

Chart 3 (BOX)  Pass-through of the exchange rate to inflation in the Czech Republic
Prices of transport and food react most strongly to an exchange rate shock
(source: Datastream, CNB calculation) 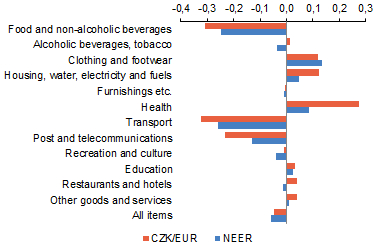 Note: Vector error correction model. For the methodology, see Babecká Kucharčuková O. (2007), CNB WP 12/2007. Appreciation shock of magnitude 1. The model was estimated for the overall consumer price index and its 12 main subcategories. Only one subcategory was included in the model at a time. Period: Jan 2000–Jan 2017.

The seemingly unintuitive response of prices of some non-tradable goods can be explained by the Balassa-Samuelson effect. In an inflation-targeting regime, which returns headline inflation towards the target, an appreciation based on an increase in labour productivity leading to a drop in tradable goods prices is necessarily reflected in growth in non-tradable goods prices. In the case of health care prices, the positive estimated coefficient may be a result of the timing of administrative effects in the past. The seemingly unintuitive response for these price categories thus does not represent a direct causal relationship.

An asymmetric response of prices to exchange rate changes has not been confirmed yet and prices usually respond in the same way to both appreciation and depreciation. The pass-through of the exchange rate and foreign prices to domestic inflation has recently been explicitly tested in the case of food prices.5 The estimated pass-through asymmetry for this price category is insignificant both statistically and economically.

The Czech economy is in a period immediately following an exit from an exchange rate commitment, which is close to a regime change.This change was announced in advance and hence expected. Any appreciation below CZK 27 to the euro will probably be perceived as long-lasting and justified by fundamentals. It can thus be assumed that the pass-through of changes in the exchange rate to inflation will be stronger than model-based responses to an unexpected shock or to econometric estimates based on data from previous years, when exchange rate movements could be regarded as short-term unexpected shocks.

1 These effects are sometimes called pricing to market.

2 This non-tradable part can be relatively high, as shown by Burstein, A., Neves, J. C. and Rebelo, S. (2003): “Distribution costs and real exchange rate dynamics during exchange-rate-based stabilizations”, Journal of Monetary Economics 50(6), pp. 1189–1214.

3 According to the CZSO methodology since January 2016 at constant prices of 2014. For comparison, the share of food imports in total goods imports was just 5% in 2016, while that of machinery and transport equipment imports was 57%. The content of these categories is not identical to the relevant CPI categories, particularly in the case of the transport CPI, which comprises new and used cars, passenger transport and fuels.

4 This result can be explained not only by trading partner structure (euro area: 58%, EU: 75%, 2016 data), but also by the widespread use of the euro as an invoicing currency even in transactions with partners from other currency zones. According to ECB (2016): “International role of the euro”, the euro’s share is 68% for goods imports and 77% for services imports.