The potential for further growth in total employment

Total employment recorded its highest-ever year-on-year growth in 2016 Q4. At the same time, the general unemployment rate fell well below the 4% level. This raises the questions of what is fostering such sharp employment growth and what further developments we can expect when the unemployment rate is already so low. 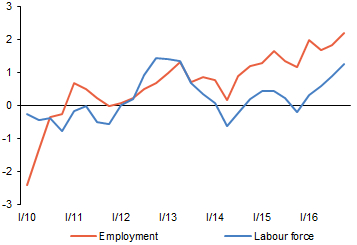 The labour force has long been growing due to demographic trends. Since 2010, however, the contribution of this factor has been mostly negative (see Chart 2). This is due mainly to the baby bust generation born from the mid-1990s onwards. According to demographic outlooks, the population will not rise markedly in the coming years either, and the contribution of the size and age composition of the population to labour force growth will probably remain negative. 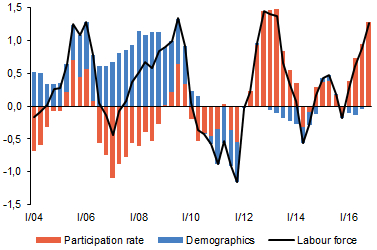 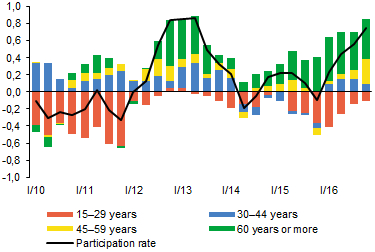 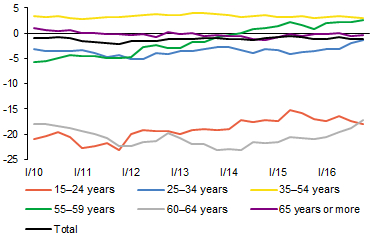 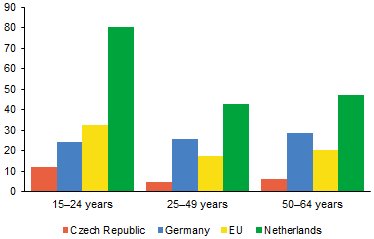 To sum up, any further growth in employment will probably be very limited. Given the low unemployment rate, the potential for further employment growth lies mainly in growth in the labour force and, owing to the Czech demographics, will depend heavily on the participation rate. The latter will probably increase further due to a gradually rising retirement age and expected growth in the supply of part-time employment. However, both these factors indicate that growth in the labour force will be sluggish, amounting to a few tens of thousands of persons a year. Given the currently favourable economic outlooks, this will lead to gradually strengthening upward pressures on wages.

1 This holds if the conditions for migration are not significantly relaxed despite the observed increased demand of Czech firms for foreign workers. Foreign workers are monitored by the Labour Force Survey to only a limited extent.

2 The retirement age in Germany has gradually been raised from 65 years to 67 years since 2012.

3 The calculation is done across five-year groups broken down by gender. As Chart 4 shows, this would mean a drop in the participation rate for some age groups.

4 The Netherlands has long had the highest share of part-time jobs in employment in the EU.