The interconnectedness of the Czech and German economies

One recent uncertainty is the economic slowdown in Germany and its transmission to the Czech economy. This box succinctly maps the interconnectedness of the two economies both from the perspective of cyclical alignment and by comparing the evolution of potential output in the two countries.

The Czech and German economies are aligned firstly through a similar course of the business cycle (see Chart 1).[1] This is also evidenced by the alignment of their industrial production cycles, which is based on the presence of Czech and German producers in the same international production and supply chains. From the sectoral perspective, this interconnection is particularly evident in the automotive industry, where a large proportion of imported intermediate goods (parts and components) come to Germany from Czech manufacturers. The cyclical alignment of the two economies is also evidenced by correlation of economic sentiment indicators, namely the business sector economic sentiment indicator and the manufacturing purchasing managers’ index. 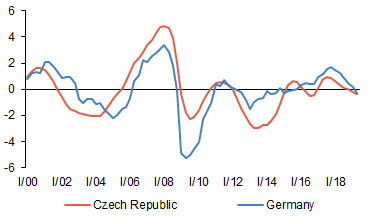 Despite the cyclical alignment, there is a marked difference in the evolution of potential output in the two economies (see Chart 2). This is linked with the real convergence of the Czech economy towards its more advanced neighbour, which reflects ongoing changes in the structure of the Czech economy. In Germany, by contrast, formation of gross value added is changing only slowly. In recent years, stronger growth contributions of Czech manufacturing and the tertiary sector – in particular market services, wholesale and retail trade, accommodation and food services, and transport – have been reflected in higher value added growth in the Czech Republic than in Germany.

Chart 2 (BOX) Real GDP trend growth
With the exception of 2009–2013, the Czech economy has shown a clear convergence trend towards the economic level of Germany
(trend component growth in %) 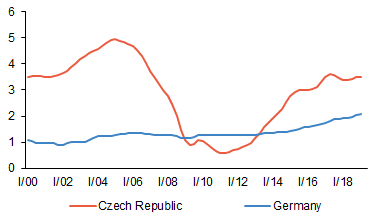 Lower unit labour costs have long contributed significantly to the expansion of domestic industry and market services. Since 2016, however, unit labour costs have been rising faster in the Czech Republic than in Germany (see Chart 3), despite growth in physical labour productivity being higher in the former than the latter (see Chart 4). Other things being equal, this worsens the price competitiveness of Czech goods and services compared with German ones on international markets. From the perspective of the overall standing of Czech output, however, this has been more than offset by a relative increase in the quality and value added of Czech products compared with German ones. One example is the Czech automotive industry, where in recent years production has widened to include higher-priced, higher-value-added models (such as new SUV models). The trend in this sector has therefore contributed significantly to continued slight growth, or only a slight decrease, in industrial production last year and so far this year, despite the ongoing decline in the German manufacturing sector.

Chart 3 (BOX) Nominal unit labour costs
The faster wage growth in the Czech Republic than in Germany in recent years has, despite higher GDP growth, been reflected in a marked increase in Czech unit labour costs
(annual percentage changes; per hour worked) 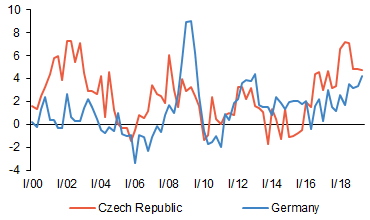 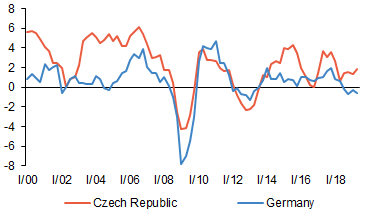 The above-mentioned factors promise continued relatively respectable growth in the performance of the Czech economy. This is based mainly on the assumption that potential output growth will remain faster in the Czech Republic than in Germany in the near future. From the perspective of value added, meanwhile, the stable domestic growth in recent quarters has been driven largely by services and other sectors (such as construction and wholesale and retail trade) oriented towards the strong Czech domestic demand. The continued solid growth in demand stems from rapid growth in wages and other household income due to persisting labour market tightness. Expansionary domestic fiscal policy is having the same effect. The above-mentioned sectors are naturally less sensitive to swings in external demand than the export-focused manufacturing industry. Nevertheless, the cyclical alignment of the Czech and German economies can be expected to persist in the medium term[2] due to their strong business and ownership interconnectedness, especially in manufacturing.

[1] For the purposes of this box, the estimates of the cycle and trend real GDP growth were performed on the basis of a trend-cycle VAR model.

[2] Although the German economy is stagnating, it is not expected to slip into a deeper and longer-lasting recession.