The CNB raised the two-week repo rate by a total of 0.7 percentage point to 0.75% in three steps between August 2017 and February 2018. This box examines in more detail the impacts of the increase in the monetary policy rate on client interest rates.

The upward shift in the financial market yield curve has been reflected most strongly in loans to non-financial corporations. The monetary policy rate hikes passed through first to financial market rates, doing so to the usual extent observed in the past (see Chart 1). The vast majority (83%) of new corporate loans are provided with a floating rate tied to the money market rate or with a rate fixed for up to three months. The transmission of changes on the financial market to client rates is therefore fast in this segment. The rate on corporate loans has recently been rising at much the same pace as the 3M PRIBOR and both are currently at their September 2012 levels. The rate on small loans of up to CZK 30 million has meanwhile increased more sharply than that on large loans. However, the spread between the rates on small and large loans remains below the long-term average due to a previous sharper decline in the rate on small loans than that on large ones. The increase in market interest rates has also been reflected in average interest rates calculated from outstanding corporate loans (see Table 1). The rate on short-term loans has gone up by 0.5 percentage point and that on loans with longer maturities by 0.3–0.4 percentage point. The broad decrease in interest margins on loans to non-financial corporations recorded in the past has thus halted and these margins have started to rise gradually. 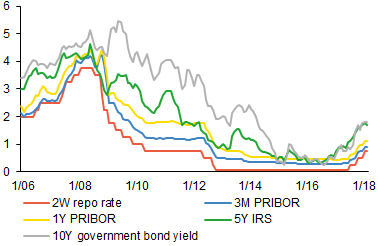 By contrast, the interest rate on loans for house purchase is rising at a slower pace than financial market rates. The share of house purchase loans with longer rate fixation periods has recently increased. The share of loans with rates fixed for over five years and up to ten years is 39%, although loans with rates fixed for over one year and up to five years still account for the largest share (52%). The mortgage interest rate depends mainly on the long-term government bond yield. The ten-year government bond yield is currently 1.8% and has increased by 0.9 percentage point in more than six months. The mortgage rate has gone up by just 0.2 percentage point in the same period and by 0.4 percentage point since it hit a historical low in November 2016 (see Table 1). The ten-year government bond yield is currently at the April 2014 level, whereas the mortgage rate was then around one percentage point higher than it is now. Mortgage rates have risen in all LTV categories and most of all in the 80%–90% band due to the CNB’s macroprudential measures (see Chart 2). 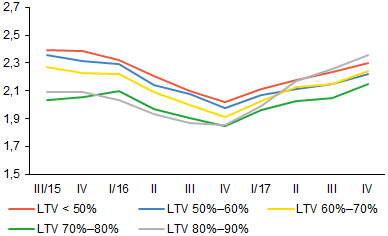 In addition to concerns about losing market share, banks’ liquidity situation is a factor behind the slower transmission to housing loan rates. Bank financing costs on the financial market have gone up since last autumn. However, given the assumed high sensitivity of demand to changes in the mortgage rate, banks are raising their mortgage rates only gradually for fear of losing market share. This is why the higher financing costs of some banks have yet to feed through fully to mortgage rates (see Chart 3). Interest margins, which affect banks’ profitability, remain low by historical standards (see Chart 4). Moreover, the negotiation of interest rates on new as well as refinanced mortgage loans for a longer period ahead may also be one of the factors behind the slower transmission.1 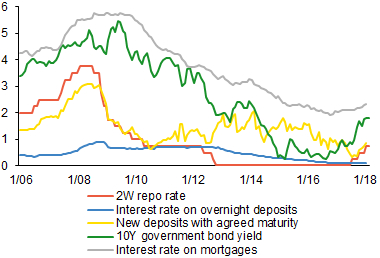 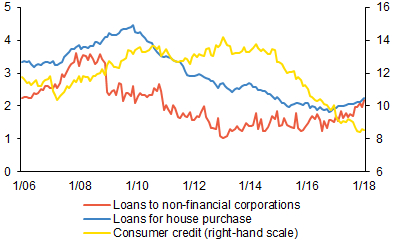 Note: Interest margins are calculated using the interest rate on new loans and the weighted rate on total deposits of the non-financial sector.

The consumer credit rate has fallen further even though financial market rates have risen (see Table 1). This mainly reflects the ongoing long-run downward trend in rates in this credit market segment, which had a partly structural2 and partly cyclical explanation. The interest margin on consumer credit is therefore continuing to shrink (see Chart 4). Market activity is concentrated mainly in refinancing (consolidating) existing loans and extending their maturity. Rates with longer fixation periods, which account for 94% of all new consumer credit, are falling. The rate with a short fixation period has conversely gone up, but the share of loans bearing this rate is negligible.

Deposit rates remain very low (see Chart 3). Banks have less incentive to raise deposit rates significantly in an environment of low interest margins and high liquidity. The rate on new household deposits with agreed maturity has risen to 0.9% in response to the changes in market rates. However, the share of these deposits in total deposits is low (around 10%). Medium-sized banks have increased their rates on deposits with agreed maturity to 1.5% in the case of households. In large banks, which account for the bulk of such deposits, the rate is fluctuating close to 0.3%. The rate on overnight current account deposits remains close to zero (see Table 1). In the past, this rate usually reflected changes in the monetary policy rate only very gradually. The share of overnight deposits in total deposits is 83% and has risen markedly compared to the pre-2008 period.

To sum up, the rise in the monetary policy rate is being reflected via market rates mainly in loan rates. This is most apparent for corporate loans; the transmission to house purchase loans is slower. Deposit rates remain very low in an environment of compressed interest margins.

1 According to some information, clients are even trying to refinance mortgage loans in advance. When refinancing, some lenders offer a guaranteed rate for a fixed period ahead before the current fixation period ends.
2 According to a forthcoming CNB Working Paper by Brož and Hlaváček (2018), falling concentration/rising competition has been the main driver of the decline in client rates on consumer credit.