The Labour Utilisation Composite Index – LUCI – was introduced two years ago and has now been extended. The labour market plays a significant role in the evolution of domestic inflation pressures, so it is important to know its cyclical position. LUCI makes it possible to aggregate a large number of time series in a transparent manner and hence provides a composite evaluation of labour market tightness. This box presents an extension of the original LUCI concept[1] and outlines its use in short-term forecasting.

Several major improvements have been made as part of the LUCI extension. First, the number of variables included has been increased. Second, the cyclical components of the time series are now filtered in a model-consistent manner,[2] unlike in the previous approach, where they were filtered outside the model. Third, it is now possible to work with time series observed at various (monthly and quarterly) frequencies, which allows for more frequent updates. The lag between LUCI and individual variables can meanwhile be modelled, due to the use of a dynamic factor model instead of the previous static one. This makes it possible to draw up a short-term outlook for the index. The first component of the dynamic factor model, which corresponds to LUCI,[3] explains about 64% of the variability of the cyclical components of the time series included.

The interpretation of historical labour market developments is very similar to that of the original LUCI (see Chart 1). Both the peaks and the troughs of the previous cycles are identified similarly by the two approaches. Their assessment of the currently still exceptionally high labour market tightness is also more or less the same. 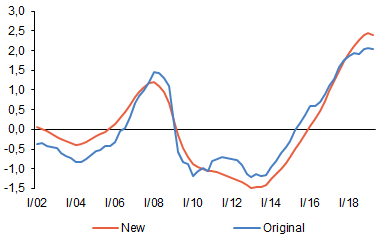 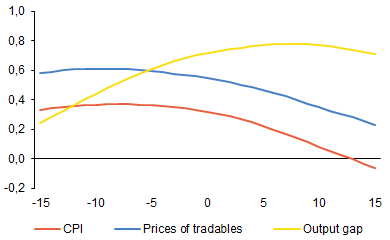 According to LUCI, the current labour market tightness is close to a historical high (see Chart 3). This is due mainly to series linked to unemployment and, to a lesser extent, to wages and costs and other factors, amid roughly equal contributions of the variables aggregated into employment and demand for labour. The contribution of wages and costs is (as in the case of unemployment) at a historical high and is thus consistent with the significant demand pressures currently observed in the domestic economy. The only gradually decreasing labour market tightness in the coming quarters will probably lead to continued brisk wage growth next year. 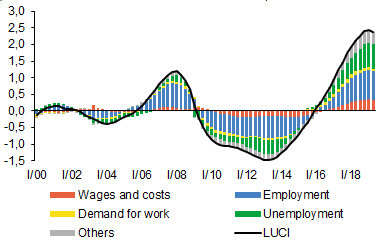