The effect of corporate investment on productivity

Fixed investment can foster future growth in labour productivity. There are at least two reasons for this. First, buying new and more efficient machinery and equipment represents technological progress for firms. It enables them to raise production while keeping labour factor inputs unchanged, which directly increases labour productivity. Second, if economic agents expect a favourable economic situation, they invest in order to expand their production capacity. Observed labour productivity growth is thus partially also cyclical in nature due to economies of scale. At the microeconomic level, investment can therefore be a leading indicator of productivity even in the absence of technological progress. However, investment decisions are also affected by non-market factors such as EU funding. So, the empirical question is how strong the above market mechanisms are and whether corporate investment really signals future productivity growth.

The relationship between productivity and corporate investment can be assessed using microdata from manufacturing. The analysis below is based on CZSO data on more than 800 large firms in this sector.1 Besides having a large range of information on the firms selected, the database also has the advantage that labour productivity can be defined here as the ratio of value added to the number of employees converted into full-time equivalents2 (see Chart 1). The data also contain the average koruna wage per full-time employee, which is one of firms’ main cost factors that can be reduced by productivity growth. 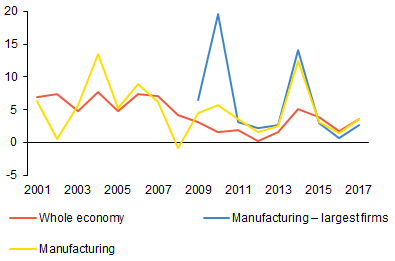 Note: Labour productivity is defined as the ratio of value added to the converted number of employees.

Most investment by manufacturing firms consists of investment in machinery and equipment. It has long accounted for about 70% of total investment in the set of firms under review.3 Calculated per employee, this investment significantly exceeds the average for the Czech economy (see Chart 2). About 20% of the investment of the firms monitored goes into buildings and structures. This, by contrast, is well below the whole-economy average (see Chart 3). 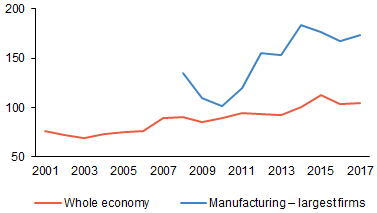 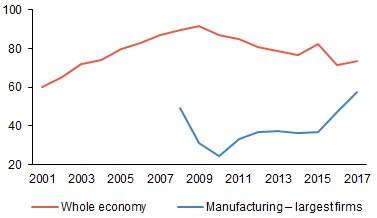 Investment in manufacturing significantly affects labour productivity in this sector, most of all with a lag of one year. A method based on Lasso regression4 was used to analyse the data referred to above. The advantage of this method is that it allows other explanatory variables to be included in the regression as control variables.5 An analysis of industrial data for 2008–2017 reveals that investment considerably increases labour productivity, most of all with a lag of one year. If CZK 1,000 per converted employee is invested in equipment and machinery in a typical manufacturing firm, its labour productivity increases by CZK 1,050 on average the following year. The same investment in buildings and structures will raise future annual productivity by CZK 730.6

The analysis thus reveals that cost-push pressures in manufacturing are considerably reduced by investment growth. Investment in machinery and equipment has the strongest effect. Investment in buildings and structures has a quantitatively smaller, but still significant, effect. Overall, given the high investment activity in manufacturing, the analysis – along with appreciation of the koruna – helps explain why the surge in wage growth observed in 2017 was not accompanied by subsequent growth in prices of tradable goods.

1    The data come from questionnaire P6-04, which contains information on roughly the 2,000 largest firms in terms of assets in the Czech economy. These data cover almost half of the manufacturing sector by number of employees and represent more than half of the value added created in the sector. The difference in coverage level between the number of employees and valued added indicates that firms with a higher number of employees are more productive due to a probably higher level of technology. Quarterly data are aggregated into annual figures in the analysis.

2  This definition is slightly different from labour productivity constructed from the national accounts as the ratio of GDP (or value added) to employment, which can be found in section III.3 of the Inflation Report.

3    This is equivalent to about one-fifth of all investment in machinery and equipment in the Czech economy.

5    As shown in the literature, such variables can include firm size and lagged productivity growth. These variables were used to eliminate the effect of false correlation between investment and productivity.