This box describes the main sources of the deviations of observed monetary policy-relevant inflation from the 2% inflation target. The analysis is based on the data used to prepare the forecast for IR II/2018 and focuses on the most recent eight quarters, i.e. 2016 Q2 to 2018 Q1. The g3 core prediction model was used for the analysis, so the results are fully consistent with the assessment of the initial state of the current forecast. At the same time, the results provide another view of the origin of the inflation pressures faced by monetary policy over the last two years. The deviations of inflation are presented in the form of a decomposition into the contributions of categories of factors (see Chart 1).1

Chart 1 (BOX) Deviations of monetary policy-relevant inflation from the 2% target
The effect of external shocks has continually been pushing domestic inflation below the 2% target; monetary policy, which is being tightened at a prudent pace, and more gradual appreciation of the koruna compared to the core model have recently been acting in the opposite direction
(percentage points) 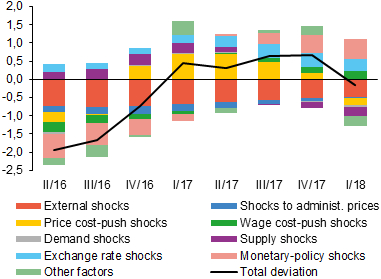 External shocks have been the most important continual source of negative deviations from the target over the last two years. Of those shocks, the ECB’s ongoing unconventional monetary policy, which is exerting upward pressure on the koruna’s exchange rate against the euro, is still having a significant effect. A decline in foreign producer prices in the effective euro area also had an anti-inflationary effect in 2016. However, this trend reversed quickly in early 2017 and producer prices started to foster a rise in inflation. The overall anti-inflationary effect of external variables therefore diminished somewhat.

The aggregate effect of the domestic economy started to drive inflation above the target at the end of 2016. The Czech economy found itself in an environment of continued economic growth in 2016. The previous anti-inflationary price and wage cost-push effects thus gradually disappeared. The rapid switch of the contribution of price shocks to inflationary at the end of 2016 was related, among other things, to one-off factors (the introduction of electronic sales registration and faster growth in imputed rent). Food prices also grew rapidly. These factors initially increased the upward pressure on inflation in 2017 but had the opposite effect at the start of this year. Administered prices, whose growth was well below 2% over almost the entire period under review, dampened inflation until the end of 2017.1 Fundamental supply shocks, which helped inflation rise above the target until mid-2017, are currently acting in the opposite direction. This is reflected mainly in rising labour efficiency growth. Growing labour market tightness caused by labour shortages has recently been reflected in higher wage growth, whose inflationary effect is gradually intensifying.

1 When the forecast is prepared, the observed data are interpreted using the g3 core prediction model, which captures the structural linkages between economic variables. Deviations of the observed data from levels consistent with these linkages are assessed by the model as unexpected structural shocks. These shocks are aggregated by type into categories called factors. Chart 1 shows the contributions of these factors to the deviations of monetary policy-relevant inflation from the target.

2 Administered price inflation was even negative in 2016.