Private investment – an analysis of individual data on non-financial corporations

The Czech economy has been strongly affected in recent years by swings in investment activity. While government investment has mainly followed the EU funding cycle, private investment has been affected by a larger number of factors. This box aims to identify those factors and determine the direction in which they have acted and their significance. The analysis draws on quarterly individual data on the financial results of non-financial corporations with 50 employees or more in 2008–2015.1 From the methodological perspective, Bayesian VAR models are used. Individual data are an alternative to aggregate data from the CZSO’s national accounts. Moreover, their nature enables us to estimate impulse responses at the industry level.

Given the degree of openness of the Czech economy, it is reasonable to assume that a large proportion of private investment can be explained by changes in external demand. Derived impulse responses confirm this assumption (see Chart 1). Taking into account the sizes of the different shocks, it is clear that external demand is the main driver of private investment. An increase in external demand leads to growth in private investment in all major sectors of the Czech economy. The biggest responses were recorded in manufacturing (especially the automotive and electrical engineering industries) and tourism (see Chart 2). As investment decisions tend to have long-term consequences for firms, they are planned carefully and expectations of future developments play a significant role in them. The analysis reveals that private investment is directly proportional to economic sentiment in the EU, which captures such expectations. However, the magnitude of the response to a 1% shock is smaller by comparison with actually observed external demand.

Chart 1 (BOX) Impulse responses of private investment to different shocks
Private investment records the biggest positive response to an increase in external demand
(responses in % to a shock of 1%, or 1 pp in the case of the real interest rate; horizontal axis – number of quarters) 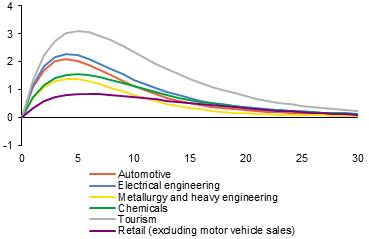 Fluctuations in the drawdown of EU funds by the corporate sector affect its investment in the same direction (see Chart 1 and also Box 1 in Inflation Report IV/2016). This is confirmed by an analysis of government capital transfers to non-financial corporations linked with co-financing of investment from EU funds. A direct analysis of individual data on the acquisition of tangible and intangible assets by non-financial corporations arrives at the same conclusions. An increase in the drawdown of EU funds for private firms has a positive effect on investment above all in manufacturing, especially in the automotive, chemicals, electrical engineering and metallurgy industries, and also in the heavy engineering and other means of transport industries. 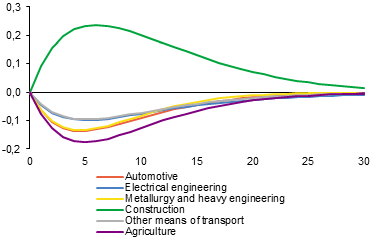 Chart 4 (BOX) Impulse responses of private investment in selected industries to a weakening of the real exchange rate
A weakening of the real effective exchange rate of the koruna has a positive effect on investment growth in export-oriented manufacturing industries and tourism
(responses in % to a shock of 1%; horizontal axis – number of quarters) 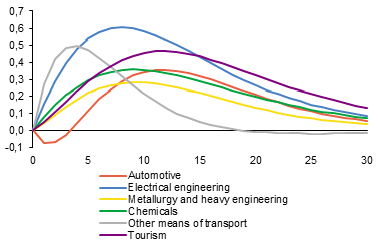 1 On average, the sample contains 9,200 firms in the period under review.

3 However, a comparison with the effects of other variables must take into account the fact that an interest rate increase of one percentage point, not 1%, is considered.