Part-time employment as a phenomenon of recent years

Part-time jobs have significantly contributed to the strong growth in employment over the last two years. Unlike at the peak of the previous business cycle, when the high growth in employment was due almost exclusively to full-time work, the contributions of part-time and full-time employment have been almost equal in the last two years (see Chart 1). Given the current labour market tightness, this has been associated with a growing participation rate, which is being pushed higher mainly by women, who are increasingly working part-time. 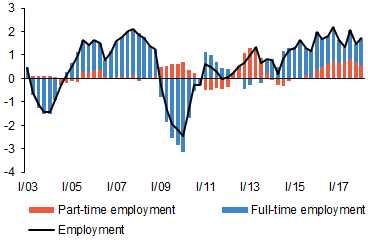 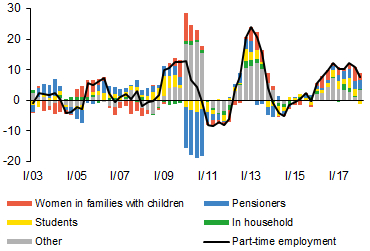 As regards sector structure, the tertiary sector accounts for about three-quarters of the growth in part-time employment. Within the tertiary sector, the shares of market and non-market services are roughly the same. The tertiary sector is followed a long way behind by industry. However, the number of part-time jobs in this sector has also grown substantially over the past two years owing to the very tight labour market. Over the last two years, the proportion of part-time employment has increased in all the main branches of the economy except market services (where it has been broadly flat).

By international comparison, the share of part-time employment in the Czech Republic remains very low (see Chart 3). This is true relative to the Netherlands, the leader in the EU, and to Germany and the European average. The differences are caused by several factors, including, for example, different economic structure (a higher proportion of services relative to industry in these countries). They are also related to the rate of economic activity. Despite having risen to a historical high in the Czech Republic, it remains lower for women and in the youngest and oldest age groups (students and people around retirement age), i.e. in categories where the share of part-time employment is typically higher. A further increase in the supply of part-time jobs could thus lead to growth in the rate of economic activity in these categories. The share of part-time employment in Central Europe is similar to that in the Czech Republic due to similar socio-cultural characteristics. 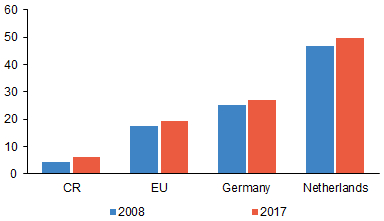 Note: The proportion of part-time work in employment among people aged 15–64.

The potential for further growth in the share of part-time employment based on the integration of unemployed persons into the labour market is limited (see Chart 4). However, the overall trend will depend on how the labour force, whose growth has recently been associated with growth in the share of part-time employment, evolves. There is still quite a large set of people among the economically inactive who are not actively seeking a job but are willing to work (around 110,000 persons). These are mainly persons with a higher preference for part-time employment due to their gender and age. However, if people in this group do not become economically active, average working hours in the Czech economy will conversely probably increase. This trend is currently evidenced by flow data showing that employees more often lengthen than shorten their working hours. 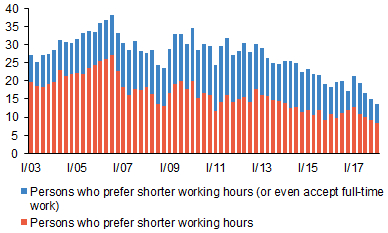