Margins and the price elasticity of aggregate supply

Producers’ and sellers’ margins and their cyclical properties have a significant effect on the dynamics of inflation. This box therefore presents the results of empirical analyses of the cyclical behaviour of margins in selected branches of the Czech economy. It uses both data on the implicit margins of the non-financial sector as a whole and estimated price spreads for selected goods.

Margins in the business sector can be inferred from book value added and the gross operating surplus.1They are closely correlated with gross and net margins respectively. Both showed an increase in year-on-year growth after the CNB introduced its exchange rate commitment (see Charts 1 and 2).2 The commitment not only had a direct effect on export-oriented sectors such as manufacturing, but also had an indirect upward effect on profitability in the tertiary sector via growth in demand. 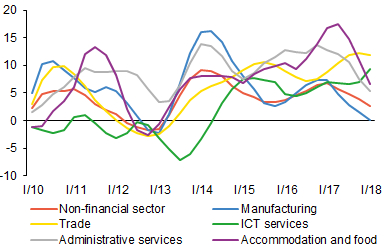 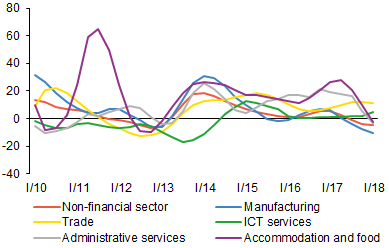 Growth in book value added remained robust until 2017, whereas growth in the operating surplus largely halted in 2016. The key factor was rapid growth in wage costs linked with emerging labour market tightness. This effect was particularly evident in manufacturing, which was the first sector to experience shortages of suitable labour. Moreover, after the exit from the exchange rate commitment at the start of 2017 Q2, it was joined by the effect of strong appreciation of the koruna, and the operating surplus in manufacturing began to decline in year-on-year terms. Growth in value added remains positive in the tertiary sector, which is benefiting from robust growth in domestic demand. Nonetheless, growing wage costs are starting to push growth in the operating surplus towards negative values. Given the rising volume of output, this means that unit margins are currently falling in most sectors after several years of growth. 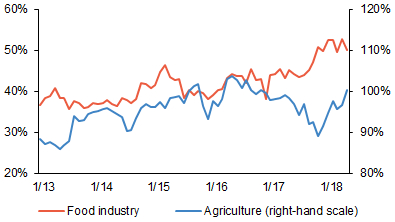 Margins on consumer prices of industrial goods are exhibiting a long-running downward trend and weak cyclical dependence. Items roughly corresponding to selected industrial goods can be found in both the consumer price index and the producer price index (using the two- to three-digit breakdowns of the two indices), and a rough estimate of the dynamics of margins, but not their levels, can subsequently be constructed.3 These margins have long been falling for the overwhelming majority of industrial goods. This is due probably to both long-term real convergence and modern technology enabling consumers to compare prices of goods on the internet, which is forcing retailers to offer lower prices. In addition to this trend, most of the goods under review show cyclical dependence, as the spread in prices increased slightly in 2006 and 2007 and is rising now as well. However, the cyclical dynamics are weaker and less pronounced than the trend dynamics.

To sum up, margins in the Czech economy have been affected both by the dynamics of costs and by cyclical demand pressures. Businesses’ margins are determined mainly by costs and the exchange rate. The effect of the exchange rate differs greatly across branches of the economy. The appreciation of the koruna is having a downward effect on demand and the koruna value of sales in export-oriented manufacturing, whereas the tertiary sector, which is geared mostly to the domestic market, is benefiting from lower prices of imported inputs. The effect of cyclical demand pressures, which is probably linked with the level of competition in the given market segment, can also be regarded as mixed. This is evidenced by margins on consumer goods, which reflect demand pressures, but with varying intensity for different types of goods. Take, for example, the significantly procyclical margins on food products, which are offered mostly on markets with an oligopolistic structure. By contrast, in the case of industrial goods, where a higher level of competition can be expected, a long-running downward trend in margins dominates the cyclical dynamics. Aggregate demand is therefore price-elastic with regard to the business cycle, but to different degrees for different goods. The economic recovery is thus generating not only cost-push inflation pressures relating to rapid wage growth, but also demand-pull pressures manifesting themselves to various degrees in price margins on individual consumer goods and hence in inflation.

2 This included an increase in both volume and unit margins following the introduction of the exchange rate commitment.

3 Unlike for food, where the price per natural unit is available, for industrial goods only indices are available, hence the level of margins cannot be constructed.