Global government bond markets have been affected in recent years by unprecedented monetary policy easing. Shorter-maturity yields have turned negative in most advanced countries. This box describes the changes that have occurred on the Czech government bond market and how the market was affected by the use of the exchange rate commitment.

The volume of government bonds held by foreign investors increased sharply when the exchange rate commitment was in place. At that time, interest in long koruna positions dominated the foreign exchange market amid expectations of a future strengthening of the koruna exchange rate. Many of these positions were created using derivatives transactions such as cross-currency basis swaps and foreign exchange swaps. These positions were opened mainly by foreign entities speculating on appreciation of the koruna after the exit from the exchange rate commitment (hedge funds and real money clients) and entities in the domestic real economy hedging against appreciation (exporters). This distorted the market in these derivatives. Their prices increased in koruna terms and their implied koruna yields thus moved further into negative territory. This distortion simultaneously meant that the implied foreign currency yields rose commensurately. This attracted another group of investors, such as foreign asset managers, who took advantage of the situation to make exchange-rate-hedged investments in koruna assets, including Czech government securities. In an environment of very low (and even negative) interest rates in euro area countries due to the ECB’s quantitative easing, they thus attempted to invest funds in transactions with positive euro yields. As a result, holdings of medium- and long-term government bonds by non-residents increased, peaking just before the exchange rate commitment was discontinued (see Chart 1). Bond trading volumes also surged at this time. However, the volume of bonds held by non-residents did not decline after the exit from the commitment. This was probably due in part to one “institutional” factor.1 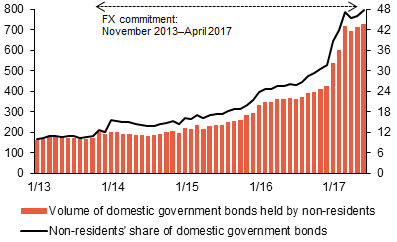 The strong foreign interest in domestic bonds contributed to a shift of their yield curve partly to negative levels. This factor dominated at the shorter end of the curve. Domestic investors (such as pension funds) therefore focused on buying Czech government bonds with longer maturities and other financial market instruments in an effort to keep achieving positive yields. Other factors affecting the shift in the yield curve included positive public budget performance and a related lower bond supply, low inflation and the stable credit rating of the Czech Republic.

The Ministry of Finance took advantage of the low/negative yields in primary auctions of government bonds (see Chart 2). A negative yield was recorded for the first time ever in August 2015. However, demand in the individual auctions remained high, coming mainly from foreign investors. Their share of the take-up of domestic government bonds has gradually been increasing. In 2015 and 2016 it averaged 47%, whereas in the first half of this year it was 55%. The effort to take advantage of the low yields led the Ministry of Finance to pre-finance its needs; in the first half of this year it issued bonds totalling almost CZK 130 billion, i.e. over 80% of the minimum volume of issues on the domestic market originally planned for 2017.2 The term to maturity meanwhile shortened below five years, as the ministry concentrated on shorter maturities with negative yields. 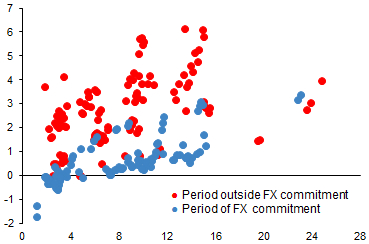 The yield curve moved upwards after the exit from the exchange rate commitment, but its short end remained slightly negative. The rise in yields was partly due to foreign investors starting to sell their koruna assets. A role was also played by the situation on foreign markets (the increase in rates in the USA, the improved economic outlook for the euro area and higher inflation expectations). Trading volumes on the secondary market returned to their long-term average (see Chart 3). The Ministry of Finance stopped making negative yields in its primary auctions and therefore considerably reduced the amount of bonds on offer. Demand from primary dealers and the average amount sold dropped commensurately. Conversely, T-bills with maturities of up to one year, whose yields remained below zero, were issued to an increased extent. 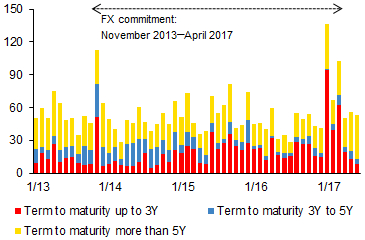 1 With effect from the end of April 2017, investment bank J.P. Morgan moved Czech bonds from developed market indexes to emerging market ones, as Czech per capita gross national income in dollar terms had been under the threshold for developed markets for three years. As the weight of Czech debt securities in emerging market indexes is higher than it was in those for developed markets, demand for Czech bonds went up. This factor partly created a counterparty for the closure of koruna bond position built up when the exchange rate commitment was in place.
2 At the end of June, the Ministry of Finance updated its Funding and Debt Management Strategy for this year, increasing the minimum amount of issues from CZK 150 billion to CZK 180 billion.