The volatility of analysts’ expectations has shown a downward trend. The early phase of inflation targeting – in the late 1990s and early 2000s – was dominated by a high degree of uncertainty. This was a period of macroeconomic instability and high sensitivity of domestic inflation to internal and external shocks. Actual inflation levels were even more volatile than the average levels expected by analysts. The estimates in each survey round also differed greatly from one analyst to another. The spread of the estimates, defined as the difference between the maximum and minimum estimates at the one-year (1Y) horizon, was 1.4 percentage points on average for the period as a whole, but was close to 4 percentage points in autumn 1999 and summer 2003. The scatter of the forecasts across the individual estimates in the individual surveys, as measured by the standard deviation, peaked at the same time. The characteristics of the estimates were also affected by the CNB’s targets, the form and level of which changed over time (see Chart 1). Table 1 shows that the above uncertainty indicators fell considerably over time. Expected inflation was less volatile at the three-year (3Y) horizon (see Chart 2) than in the 1Y outlook (with standard deviations of 0.6 and 0.9 respectively), but the spread between the maximum and minimum estimates of long-term expectations was slightly higher.

Chart 1 (BOX) Expected inflation at the 1Y horizon
A high degree of uncertainty was observed in inflation expectations after the introduction of inflation targeting; the uncertainty, however, decreased considerably over time
(average; min and max in %; standard deviation in percentage points) 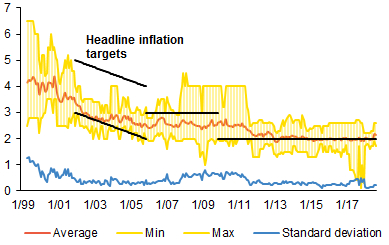 The expected inflation levels were overestimated compared to the actual ones on average. The mean error (ME) of the forecast is negative (see Table 1), so the forecasted levels were higher than the subsequent actual levels. This mainly reflected episodes of exceptionally low inflation in 2002–2003, 2009 and 2014–2016, when inflation was negative for several months. Higher statistics for the MAE (mean absolute error) than for the ME indicate that the analysts made estimation errors in both the negative and positive directions. The analysts underestimated actual inflation most of all in early 2008, when inflation was affected by an unexpected build-up of internal and external cost shocks (increases in indirect taxes, high growth in food and energy prices and rent deregulation) in addition to an overheated domestic economy. The relatively high estimation errors are therefore no surprise. The root mean squared error (RMSE) statistics reveal that the error rate of the estimates in individual surveys is higher at the 3Y than the 1Y horizon. This is probably because short-term forecasts can rely more on inflation persistence and better reflect the impacts of shocks and because their fulfilment is unaffected by shocks that occur two to three years ahead. As the period under assessment moves closer to the present, the statistics decrease at both horizons, so the predictive power of the indicators steadily improves over time (see Table 1).

Chart 3 (BOX) Implicit expected inflation at the 1Y horizon
Expected inflation derived from the predicted path of GDP and wages is relatively volatile
(average; min and max in %; standard deviation in percentage points)

Note: The wage and GDP predictions used to calculate implicit inflation are fixed-event forecasts relating to some future point in time. The time interval for which the prediction is made thus shortens over time; the figures expected for the following year are used in this case. Implicit inflation has been available since 2007, when expected nominal wage growth estimates were incorporated into the FMIE questionnaires. 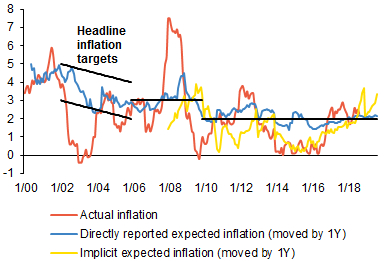 To sum up, the predictive power of measured expectations is improving over time and their scatter and volatility is simultaneously decreasing. The CNB’s 2% target has thus been a good nominal anchor for the financial market in recent years. Based on measured inflation expectations, this target remained credible at the time of the exchange rate commitment, when – by historical standards – reported expectations deviated from the CNB’s target only a little at the 1Y horizon and hardly at all at the 3Y horizon.

1 The full survey results are available with monthly frequency since 1999 (see: http://www.cnb.cz/en/financial_markets/inflation_expectations_ft/index.html). The respondents are analysts from large banks and brokerages that are highly active on the financial market. The current line-up consists of 17 analysts, 14 of whom are Czech and three are from other countries.

2 Implicit expectations were examined in the box The anchoring of inflation expectations in the Czech Republic (see http://www.cnb.cz/en/monetary_policy/inflation_reports/2017/2017_I/boxes_and_annexes/zoi_2017_I_box_1.html) in IR I/2017. There are substantial differences between implicit and reported expectations. This may be due partly to the different constructions of these two indicators of expected inflation. Another likely reason is the less than perfect mutual consistency of the analysts’ predicted figures for inflation, real GDP and nominal wages.