A look back at the discontinued exchange rate commitment

On 6 April 2017, the Bank Board decided to end the CNB’s exchange rate commitment with immediate effect. The commitment had been introduced in November 2013 as an additional instrument for easing the monetary conditions in a situation where the Czech economy had been in danger of slipping into deflation. This box gives a brief summary of the economic developments during the existence of the commitment which led initially to its prolonging and later to gradual fulfilment of the conditions for its discontinuation this spring.

In 2013, the Czech economy remained in a protracted recession that had started in previous years. The share of unemployed persons was close to 8%, wages were stagnant and inflation net of tax changes was falling towards zero. Household income and consumption were dropping, and firms had lower profits and were investing less. At that time, the CNB had already kept interest rates at technical zero for a year and its forecasts were indicating that the economy would face a deflation-recession spiral if it did not intervene. It responded to this threat first by committing to leave interest rates at technical zero over a longer horizon until inflation pressures increased substantially. In addition, in the second half of 2013 it communicated that it was ready to use the exchange rate if a further monetary policy easing became necessary, and that the likelihood of such a measure was increasing. Eventually, an exchange rate commitment, or floor, of CZK 27 to the euro was adopted at the Bank Board’s monetary policy meeting on 7 November 2013.

After the exchange rate commitment was announced, the koruna weakened above the required floor with the aid of foreign exchange interventions by the CNB (see Chart 1). The CNB clearly declared that it stood ready to intervene without any time or volume limits. Thanks to this, the exchange rate commitment quickly earned high credibility. Until the summer of 2015, the koruna was above the floor of CZK 27 to the euro without the need for CNB interventions. In summer 2015, however, quantitative easing by the ECB and continued favourable developments in the domestic economy pushed the koruna to the commitment level. From July 2015 onwards, the CNB therefore intervened against appreciation below the floor when needed. By March 2017, the interventions had totalled EUR 75 billion.

The weakened exchange rate contributed significantly to the economic recovery that occurred in 2014. Besides easy monetary policy, the turnaround in the domestic economy was fostered by a recovery in external demand and the discontinuation of restrictive domestic fiscal policy. Household consumption and investment started to rise, the unemployment rate went down and the economic sentiment of consumers and businesses improved. Domestic economic developments remained favourable over the next more than two years.

The renewed economic growth and the improvement in the labour market have led to a rise in core inflation to more than 1% since late 2014. Core inflation had last reached this level before the global financial and economic crisis. However, headline inflation remained close to zero almost until the end of 2016 due to escalating deflationary tendencies in the euro area and falling world prices of oil and other commodities. These strengthening anti-inflationary pressures from abroad were reflected in domestic prices mainly through a deepening decline in foreign producer prices, which in the outlooks were rebounding from increasingly low levels (see Chart 2). In the end, they did not return to year-on-year growth until early 2017, i.e. roughly three years later than originally expected.

The CNB looked past the first-round anti-inflationary effects of the favourable supply-side shock linked with the drop in world oil prices.The exchange rate commitment was thus not moved to a weaker level. However, it had to be prolonged in several steps. This was sufficient to prevent the anti-inflationary shocks from having negative second-round effects on the Czech economy. Such effects could have taken the form of a fall in inflation expectations and more subdued nominal wage growth and could have jeopardised the fulfilment of the price stability mandate in the longer term. However, no such thing happened, thanks in part to the CNB’s monetary policy and its communication. On the contrary, inflation rose towards the 2% inflation target in late 2016 as the anti-inflationary effect of import prices unwound and the inflationary effect of the domestic economy continued.

The prolonging of the exchange rate commitment also reflected an intensifying easing of ECB monetary policy. Besides lowering its deposit rate to negative levels (-0.4%), in March 2015 the ECB launched an asset purchase programme of EUR 60 billion a month as part of its unconventional (quantitative) easing of monetary policy. In April 2016, it increased the monthly purchases to EUR 80 billion. Since April 2017, its monthly purchases have been EUR 60 billion. They will continue at least until the end of the year.

Annual consumer price inflation continued to rise in the first few months of 2017, exceeding the CNB’s target of 2%. However, inflation remained within the tolerance band around the target. This rise in inflation was due, in addition to a further increase in fundamental cost pressures, to one-off effects in the form of rapid growth in traditionally volatile food prices and the price impact of the launch of electronic sales registration in accommodation and food services. The CNB had expected inflation to rise temporarily above the 2% target within the confines of the tolerance band since the very introduction of the commitment in late 2013.

Right from the start of the exchange rate commitment, shaping expectations about its discontinuation had been an important part of the CNB’s communication. To this end, the CNB Bank Board primarily used a “hard commitment” specifying the minimum duration of the commitment. The hard commitment was fully met. The CNB also provided information on the exit date expected or considered likely by the Bank Board and on the timing of the exit assumed in the forecast (see Chart 3). 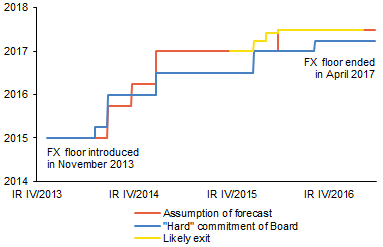 The commitment was discontinued quite soon after the end of the “hard commitment” at an extraordinary monetary policy meeting on 6 April 2017. At this meeting, the Bank Board stated that the conditions for sustainable fulfilment of the 2% inflation target in the future had been met. Therefore, continuation of the exchange rate commitment was no longer needed to fulfil the CNB’s primary objective of price stability.

The exit from the exchange rate commitment was the first step towards a gradual return of the overall monetary conditions to normal. Persisting domestic cost pressures coupled with an unwinding of foreign anti-inflationary effects are generating a need to return the CNB’s monetary policy to a neutral stance. According to the current forecast, the majority of this shift will be delivered by appreciation of the koruna, while a smaller part will reflect an increase in interest rates as from the second half of this year (see Chart 4). However, there is a significant uncertainty about the evolution of these two components of the overall monetary conditions in the quarters ahead. This uncertainty is due above all to uncertain exchange rate movements in the next few quarters, which will reflect past hedging of exchange rate risk by exporters before the exit from the exchange rate commitment and the closing of koruna positions by financial investors after the exit. In this situation, the CNB is ready to make flexible use of its instruments to fulfil its primary statutory mandate.