Price deregulation in the period of transformation of the Czech economy

In the transition economies, including the Czech Republic, price liberalisation was not implemented in full measure in the first years of the transformation period. This was particularly the case with items for which relaxing the price formation process would have had large social impacts on the population. The liberalising of their prices to the market level was therefore spread over several years. Prices thus continued to be regulated by the state in a number of areas, chiefly housing, public transport, health and education. As the adjacent chart shows, the process of "aligning" prices to their market levels in these areas significantly affected consumer price inflation. For various reasons (government decisions, sizeable changes in prices of external inputs, etc.) this process proceeded irregularly. Nevertheless, from the longer-term point of view, a downward trend in the effect of changes to regulated prices on overall inflation is noticeable. In particular, the figures on the structure of inflation in 2003 Q1 beg the question of whether the process of price "alignment" is now complete (i.e. whether the prices of regulated items now correspond to actual costs and whether activities are profitable), or whether for some items there still persist big differences between their market and regulated prices.

Broadly speaking, one can say that by 2001-2002 the overwhelming majority of regulated prices had been aligned (thanks in part to the favourable development of market factors). However, this does not mean that regulated prices no longer exist as a category. They remain a significant component of the consumer basket, with a constant weight of almost 20% and containing 31 items (or groups of single-type items). However, by comparison with previous years, the number of items subject to price ceilings has dropped and the number of items whose prices are regulated on a cost-plus basis has increased.

In the case of some important regulated items, price-setting powers have been transferred from the government (Ministry of Finance) to special regulatory authorities. This institutional change was made as part of the elimination of "cross financing" at the beginning of 2002. Cross-financing was a phenomenon that went hand in hand with the setting of price ceilings for some items. A typical example was prices of electricity for households, which did not cover suppliers' costs. These businesses therefore had to cover part of their losses arising from the cheaper electricity they supplied to households out of their profits from the higher prices charged to other economic sectors. A similar practice was applied in the case of natural gas supplied to households. Electricity and gas prices for households are currently set by the regulatory authorities, who adjust prices on the basis of analyses of the suppliers' actual costs. Their role is to protect the consumer wherever the seller enjoys a monopoly position. The government no longer draws up a price deregulation programme.

Under Act No. 526/1990 Coll., on Prices, two methods of price regulation are currently applied. The first of these relates to officially set prices, which comprise fixed prices and price ceilings. The second involves regulating prices on a cost-plus basis. In the past a third method of regulation - "time-regulated prices" - was used, although this was discontinued after the first year of price regulation in 1991. It is also necessary to mention that prices in any particular area (health, for instance) are not usually regulated by a single method - items with both price ceilings and cost-plus prices can be found.

In the category of cost-plus regulation, prices may only reflect the economically justified goods-acquisition, processing and circulation costs posted in the accounts, plus a reasonable profit, plus tax and customs duties. The competent regulator merely defines the costs that may not be considered economically justified. Only in exceptional cases (postal services) does the regulator still set price ceilings for particular services or rules for calculating individual cost items. Prices regulated on a cost-plus basis include water-supply and sewage-collection charges, bus and railway fares, and heat-supply prices for households. This method of price regulation is also used for postal, health and waste-collection services. It is also applied to co-operative housing built with the aid of financial, credit and other assistance provided to co-operative housing schemes.

The price-ceiling method currently applies to a relatively small number of items. These include certain drugs and most of the health services subject to price regulation (although as regards drugs, the calculation of inflation only includes the additional charge paid by the patient, and not the total price of the drug), as well as municipal public transport, taxi services (fares are set by local authorities) and telecommunications. The price-ceiling method is also the primary method for regulating electricity and gas prices. Regulated price inflation is also affected by national and local charges, even though these are not prices in nature.

Given the progress achieved with price deregulation, we can expect headline consumer price inflation to be affected by changes to regulated prices to a lesser extent in future than in the previous years of the transformation. However, changes in regulated prices resulting from shocks (such as the cost impact of a sharp rise in oil prices on world markets) may still have major impacts on inflation. 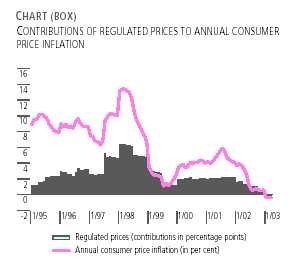