The causes of the observed slowdown in export growth

According to the national accounts, year-on-year growth in exports of goods and services slowed sharply in 2016 Q3. It was not only well below the forecast, but also below the estimate of effective external demand growth, which determines the export forecast from the long-term perspective. The gap between the year-on-year dynamics of exports and effective external demand had already started to grow considerably at the beginning of 2016 and widened further in Q3 (see Chart 1). 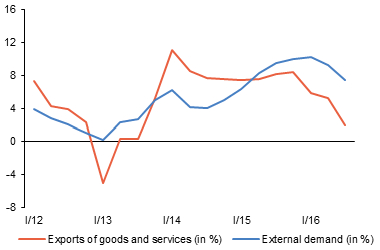 Monthly data from the foreign trade database reveal that – like industrial production – the year-on-year dynamics of goods exports were unusually volatile during 2016 Q3, owing mainly to developments in the automotive industry. This sector was initially affected by a change in the usual timing of company holidays (from August to July), which caused an extraordinary swing in transport equipment exports in this period (see Chart 2). A similar pattern was observed for exports of machinery and electrical equipment,1 which are produced partially for the automotive industry. Although the July decline in exports was more than offset in August, exports fell again in September. By comparison with previous quarters, transport equipment exports increased only marginally and exports of machinery and electrical equipment switched to a year-on-year decline. The October data showed a continued year-on-year decline in exports, with transport equipment exports also switching to negative figures and the decline in exports of machinery and electrical equipment deepening further. Exports in these categories returned to year-on-year growth in November, but the rate of growth was much lower than it had been in 2016 H1.

A territorial breakdown reveals that the main factor was an unwinding of growth, followed by a decline, in automotive exports to Western Europe. This is confirmed by individual data on industrial production in this sector, which indicate a marked slowdown in year-on-year growth in revenues from exports of own products to euro area countries in September (see Chart 3). A slowdown in year-on-year growth in revenues of exporters of partsfor the automotive industry had a dominant effect. However, the major domestic carmakers also recorded lower growth in overall export revenues in September. There were significant differences between them as regards revenues and growth in the numbers of cars produced and exported. During 2016 Q4, overall growth in carmakers’ sales returned to the levels observed in 2016 H1, but growth in revenues from exports of parts for the automotive industry remained sluggish. 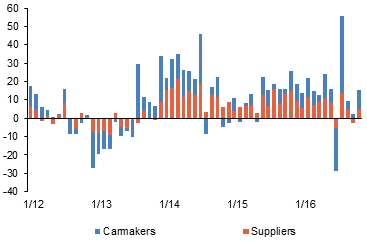 Data on external trade and industrial production therefore suggest that the marked slowdown in exports in 2016 Q3 was due to developments in the automotive industry. Domestic car production recovered quickly following the short-lived decline in Q3, but exports of parts for the automotive industry remained subdued in the first two months of Q4. This is probably connected with demand for new cars in Western Europe, which can be proxied by statistics on new passenger car registrations. Data from the European Automobile Manufacturers’ Association show that year-on-year growth in new passenger car registrations peaked in 2016 H1. In 2016 H2, however, the observed growth in registrations was less than one-half of that in H1 and continued to follow a downward trend (see Chart 4).2 By comparison with H1, the output of the automotive industry, which is mostly exported, was therefore unable to outweigh as strongly the persisting fall in exports of chemical products, fuels and electricity caused by shortfalls in domestic production last year. 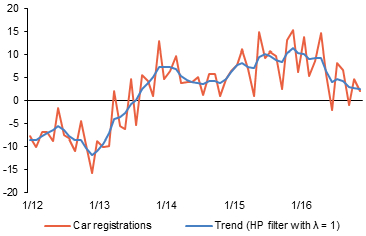 1 Among other things, this category includes engines, clutches, gearboxes and electric wiring.

2 This was confirmed by recent December data, according to which new passenger car registrations in Western Europe rose by just 2% year on year.