Return to the publication of numerical exchange rate forecasts

The CNB started to publish forecasts for the nominal koruna-euro exchange rate in 2009. It thus became the only central bank in the world to publish forecasts for the nominal exchange rate against a specific currency in numerical form. This increase in forecast transparency was useful to analysts and market participants. With knowledge of the exchange rate that the central bank uses in its forecasts, they can better assess how new information affects the balance of risks to the forecast. As a result, they can better understand the Bank Board’s decisions. For example, if the exchange rate is appreciating faster than forecasted but the prediction is materialising in all other respects, it is likely that the central bank will compensate for the greater tightening of the monetary conditions via the exchange rate by tightening policy less via interest rates. If the markets take this into account, their expectations of future interest rate growth will be lowered, which in turn will lessen the rate of appreciation. Therefore, publication of the exchange rate forecast by the central bank has a stabilising effect. This is ultimately beneficial to the whole economy.

With this Inflation Report, the CNB is returning to publishing a numerical exchange rate forecast in the form of a fan chart. This move forms part of the normalisation of CNB monetary policy. The time gap between this step and the exit from the exchange rate commitment last April was due to the risk that an exchange rate path published soon after the intervention regime ended could have been misinterpreted by market participants as the central bank’s intended or preferred path. In addition, the confidence intervals in the fan chart could have been misconstrued as sensitivity thresholds, the crossing of which would lead to the CNB returning to the forex market. Moreover, the risks connected with a premature return to publication of the exchange rate forecast were amplified by the fact that interest rates were still at the zero lower bound and monetary policy therefore had no standard instrument for reacting to an unexpected sharp appreciation. However, these risks shrank substantially as the exchange rate turned out to show no major swings and interest rates were increased above technical zero during 2017. 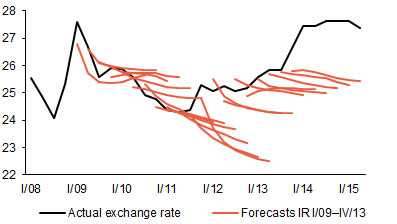 The exchange rate is generally difficult to forecast. In the case of the CNB forecasts published since 2009, the average absolute deviation of the actual exchange rate from the CNB forecast was just below CZK 0.5/EUR on average at the one-quarter horizon and about CZK 1.1/EUR at the one-year horizon. Before the exchange rate commitment was adopted, the forecasts on average expected the koruna to be stronger at both the one-quarter and one-year horizon than it subsequently turned out to be (see Chart 2). In the period of 2012–2013, the CNB’s communication of the possible use of the exchange rate as a monetary policy instrument contributed to these deviations, fostering a gradual weakening of the koruna. The subsequent introduction of the exchange rate commitment in November 2013 and the related sharp depreciation to CZK 27 to the euro were not anticipated by the CNB’s earlier forecasts, so the exchange rate outlooks consistent with those forecasts were heading towards stronger levels. By contrast, in the period before the global financial and economic crisis, and also in 2009–2010, the actual exchange rate usually deviated from the CNB’s forecasts to the stronger side. 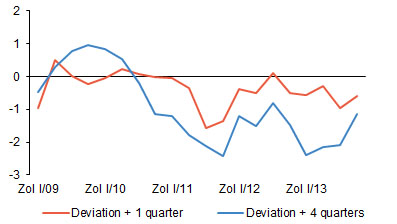 Although the exchange rate forecast may not materialise, it gives market participants a guide to the future monetary policy stance. A deviation of the actual exchange rate from the forecasted path points to a need to change the outlook for the interest rate component of the monetary conditions. This dependence is captured in the Inflation Report by an exchange rate sensitivity scenario and in the period between two forecasts by the Graph of Risks to the Inflation Projection (GRIP; see the Annex to Inflation Report III/2011), publication of which will resume in March 2018.