The g3+ model reflects the CNB’s past experience and current trends in macroeconomic modelling for monetary policy purposes. From the viewpoint of economic theory, g3+ is still a dynamic stochastic general equilibrium model. Compared with g3, the new model has a more elaborate external block, which divides foreign producer prices into their energy and core components. In addition, g3+ contains changes in the modelling of the household sector and a new way of incorporating exogenous outlooks. Last but not least, the switch to g3+ involves adjusting some steady-state levels and parameters. Verification of the theoretical foundations and empirical properties of g3+ (including historical simulations, impulse response analysis and spectral analysis) and above all testing of the new model in several rounds of internal shadow forecasting demonstrated that it offers greater predictive accuracy and more intuitive interpretation of key macroeconomic variables. The CNB’s new core model was first mentioned in Inflation Report II/2019, in which it was used to draw up an alternative scenario.

One of the reasons for the model change was to make the external block richer in structure and more internally consistent. This improves the predictive power of the model as a whole. The previous g3 model worked with GDP and the PPI in the effective euro area and the 3M EURIBOR, which were modelled as mutually independent autoregressive processes. In g3+, however, the external block is newly represented by a New Keynesian small structural gap model in which the external variables are mutually connected. Despite an increase in the number of variables,1 the external block of the model remains sufficiently operational. Its richer structure allows for more detailed analysis of developments abroad and their impacts on the Czech economy. The model offers significantly improved identification of the position of the foreign economy in the business cycle and a more detailed view for the interpretation of other external variables. In the case of producer price inflation, for example, it is possible to identify, among other things, the contributions of ECB monetary policy and the marked drop in oil prices during 2014. In addition, the external block is a closed system independent of the Czech economy.

The new external block structure brings the model response of the domestic economy to foreign developments closer to reality. For example, higher external demand no longer causes the koruna to appreciate sharply against the euro, as foreign interest rates go up at the same time, dampening such appreciation.2 Another significant extension of the model is the division of foreign producer prices into their core and energy components. The core component mainly reflects fundamental macroeconomic developments abroad. The energy component captures price developments in foreign industrial sectors, derived from global oil prices and other energy prices (see Chart 1). When the energy component of foreign prices rises, the koruna weakens due to a deterioration in the terms of trade, whereas when the core component of foreign prices rises, the koruna strengthens in response to an increase in domestic producers’ price competitiveness.

Chart 1 (BOX) Decomposition of the foreign PPI in g3+ 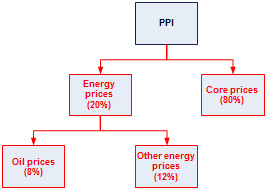 Note: New elements and linkages in g3+ are depicted in red. Their shares in the total index are given in parentheses.

A new feature of the domestic part of the model is the inclusion of energy in the factors of production. Two types of importers are thus considered in g3+ – importers of energy and importers of other goods and services. The two types of imports are combined in different ratios with domestic intermediate goods in the production of final products in each sector of the economy (see Chart 2). The new import breakdown better captures the Czech Republic’s foreign trade structure, in which energy imports exceed energy exports several times over. Given the structure of Czech exports, a change in energy prices does not directly affect the price competitiveness of Czech exporters, as most domestic exporters compete on foreign non-energy goods and services markets. The division of imports in the model reflects this fact and results in the Czech economy – including inflation and the monetary policy response – following a different path in the case of cost shocks to energy prices as compared to shocks to other import prices.

Note: New elements and linkages in g3+ are depicted in red.

Another extension of the model concerns private consumption, which is now determined by two types of households. Households of the first type – the traditional type from the perspective of the original model – smooth their consumption over time thanks to access to the financial market, where they can borrow to consume or, conversely, deposit their saved income. The second, newly introduced type of household does not have access to the financial market and spends all its income on consumption in any given period (“rule-of-thumb” or “hand-to-mouth” households). The introduction of the second type reflects the systematic deviations of household consumption from the permanent income hypothesis indicated by the available data and by economic research. The proportion of households with no access to the financial market in the model is 30%. Additionally, the utility function of the first type of households has been changed. In g3+, these households now take into account their level of consumption in the previous period when optimising. This level of consumption directly enters their utility function (internal habit formation). This means they are aware of their consumption habits and the impact of those habits on their utility. In g3, by contrast, a household could influence its consumption habits and their impact on utility only indirectly. The utility function took into account the total consumption of the previous period, which an individual household could not influence (external habit formation). These extensions of the household consumption equation bring the model structure closer to reality and improve its predictive properties, especially as regards household consumption, and therefore also make the GDP forecasts more accurate.

Adjustments have also been made to some steady-state levels and parameters of the model (see Table 1). With regard to developments in the euro area, the steady-state foreign nominal interest rate (the monetary policy-neutral foreign interest rate) has been lowered. The lower growth in foreign economic activity compared with the pre-crisis period, which has been observed even after the fading-out of the financial crisis, has led to a downward revision of steady-state GDP growth in the effective euro area. This is reflected in a lower equilibrium growth rate of Czech exports, owing to an unchanged elasticity of demand for Czech exports at roughly four times the growth rate of effective euro area GDP. The import intensity of government consumption has been incorporated into the model, whereas the import intensity of investment has been reduced. All GDP components in g3+ are thus a combination of imported inputs and domestic intermediate output. Additional changes include a slight reduction in the forward-looking nature of the exchange rate equation (the uncovered interest parity condition) and an increase in the persistence of wages and export prices.

Besides these model changes and adjustments to the calibrations, a new way of working with exogenous outlooks has been introduced. Outlooks for exogenous variables (including administered prices and government consumption) spanning the entire forecast horizon – and in the case of foreign variables several years beyond it – are still used in the preparation of the forecast. However, the information from these outlooks is now incorporated only gradually into agents’ expectations and decisions. This is due to the limited availability and above all reliability of longer-term outlooks. The nearest part of the available outlooks is fully reflected in each forecasted quarter in the decisions and expectations of economic agents, whereas the more distant part is reflected only partially, and in the given period the most distant part of the information is not reflected in agents’ behaviour at all.3 The start of the forecast horizon is therefore not affected by very distant outlooks. An advantage of the new approach is that expectations are formed consistently in each period of the forecast regardless of when the forecast is drawn up. Changes between forecasts stemming from the outlooks for exogenous variables are thus due solely to changes in those outlooks and not to the shift in the horizons used in the forecast.

3 Specifically, outlooks for external variables for the nearest five quarters are fully reflected by all agents. The proportion of agents who take into account outlooks six to nine quarters ahead falls steadily, and outlooks ten or more quarters ahead are not reflected by economic agents at all. Outlooks for domestic exogenous variables use shorter horizons, but they are now also partly expected in g3+, unlike in the previous version of the model.