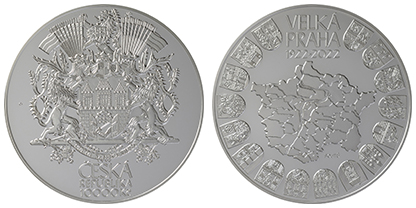 On 30 November 2021, the Czech National Bank is issuing a CZK 10,000 commemorative silver coin to mark the 100th anniversary of the establishment of Greater Prague. The coin is minted of silver having a fineness of 999 and is issued in normal quality in matt and polished variants. The polished coin has a matt relief and a polished field. The edge of the matt coin is milled and that of the polished coin is plain. The coin is 100 mm in diameter, weighs 1,000 g and is 14 mm thick. As with any other coins, upward deviations in silver content of 0.1% and weight of 10 g and deviations in diameter of 1 mm and thickness of 1 mm are permitted.

The obverse side of the coin features the historical coat of arms of the City of Prague. The texts “ČESKÁ” and “REPUBLIKA” and the denomination and abbreviated monetary unit “10 000 Kč” are located over three lines in the bottom part of the coin. The mark of the Czech Mint, in the form of the letters “Č” and “M”, is located near the left-hand edge of the coin. The reverse side of the coin features a map of Greater Prague showing the territories of all the previously independent historical communities and towns which made up Greater Prague in 1922–1968. Depicted around circumference of the coin in a clockwise direction are the escutcheons from the coats of arms of the following communities and towns: Vršovice, Košíře, Smíchov, Břevnov, Bubeneč, Vyšehrad, Hradčany, Malá Strana (Lesser Town), Staré Město pražské (Old Town of Prague), Nové Město pražské (New Town of Prague), Libeň, Vysočany, Karlín, Žižkov, Královské Vinohrady and Nusle. The texts “VELKÁ”, “PRAHA” and “1922–2022” are located over three lines in the upper part of the coin. The surname of the designer of the coin Zbyněk Fojtů is situated below the map of Greater Prague.

Each coin comes with a blue catalogue card containing a description and a half-size relief of the coin.