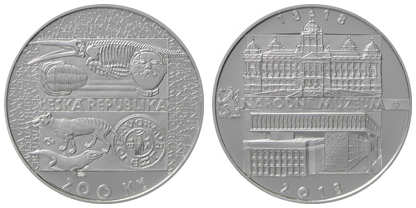 On 5 September 2018 the Czech National Bank is putting into circulation a CZK 200 commemorative silver coin to mark the 200th anniversary of the establishment of the National Museum. The coin is minted from an alloy containing 925 parts silver and 75 parts copper and is issued in two versions, normal quality and proof quality, which differ in surface treatment and edge marking. Proof-quality coins have a highly polished field, a matt relief and a plain edge with the inscription in Czech “ČESKÁ NÁRODNÍ BANKA * Ag 0.925 * 13 g *”. Normal quality coins have milled edges. The coin is 31 mm in diameter, weighs 13 g and is 2.3 mm thick. As with any other coins, deviations in diameter of 0.1 mm and thickness of 0.15 mm are allowed. Upward deviations in weight of 0.26 g and silver content of 1% are permitted.

The face side of the coin features two display cases containing selected exhibits of the National Museum. The upper case contains a fin whale skeleton, a trilobite fossil and the stone sculpted head of the Celtic Hero from Bohemia found in Mšecké Žehrovice. The lower case contains a thylacine, a Cape Verde giant skink and a Boleslaus II denarius. The name of the state “ČESKÁ REPUBLIKA” is located between the cases. The field around the upper, left-hand and right-hand edge of the coin is filled with the names of buildings managed by the National Museum. The denomination and abbreviated monetary unit “200 Kč” are written around the lower edge of the coin. The mark of the Czech Mint, in the form of the letters “Č” and “M”, is situated below the head of the thylacine. The reverse side of the coin features the Historical Building of the National Museum in the upper part and the New Building of the National Museum in the lower part. The upper edge of the coin contains the year "1818", and the year "2018" is situated near the bottom edge. The text “NÁRODNÍ ” is located in the middle of the field between the buildings. The Czech lion is located to the left of this text and the initials of the designer of the coin Petr Horák, in the form of the letters “H” and “P”, are located to the right.