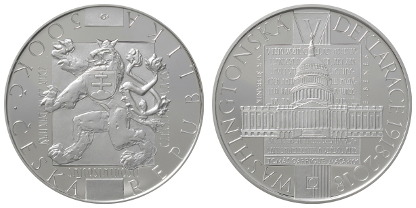 On 17 October 2018 the Czech National Bank is putting into circulation a CZK 500 commemorative silver coin to mark the 100th anniversary of the Washington Declaration. The coin is minted from an alloy containing 925 parts silver and 75 parts copper and is issued in two versions, normal quality and proof quality, which differ in surface treatment and edge marking. Proof-quality coins have a highly polished field, a matt relief and a plain edge with the inscription “ČESKÁ NÁRODNÍ BANKA * Ag 0.925 * 25 g *”. Normal quality coins have milled edges. The coin is 40 mm in diameter, weighs 25 g and is 2.90 mm thick. As with any other coins, deviations in diameter of 0.1 mm and thickness of 0.15 mm are allowed. Upward deviations in weight of 0.50 g and silver content of 1% are permitted.

The obverse side of the coin features an outline of the deed of the Washington Declaration overlaid by a heraldic figure of the Czech lion bearing a shield with the coat-of-arms of Slovakia on its chest. The text “ZDAR, ZDAR, ZDAR NAŠÍ SAMOSTATNOSTI CZECHOSLOVAKS!” is located to the left, below and to the right of the outline of the deed. The denomination and abbreviated monetary unit “500 Kč” and the text “ČESKÁ REPUBLIKA”, separated with a dot, are written around the outer circle of the coin. The mark of the Czech Mint, in the form of the letters “Č” and “M”, is situated near the upper edge of the coin. The reverse side of the coin contains a silhouette of the Capitol Building in Washington, D.C. in the foreground. A deed with a stylised part of the text of the Washington Declaration and the name “TOMÁŠ GARRIGUE MASARYK” are located below it. The name “M.R.ŠTEFÁNIK” is to the left of the deed and the name “E.BENEŠ” to the right. The deed lies on top of the flag of Czechoslovakia, whose triangle features the letter “V”. Written around the outer circle of the coin is the unclosed text “WASHINGTONSKÁ DEKLARACE 1918–2018”. The initial of the designer of the coin Jakub Orava – the letter “O” in a frame – is situated near the bottom edge.

Each coin comes with a light green catalogue card containing a description and the relief of the coin.