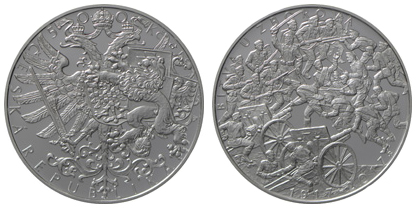 On 28 June 2017 the Czech National Bank is putting into circulation a CZK 500 commemorative silver coin to mark the 100th anniversary of the Battle of Zborov. The coin is minted from an alloy containing 925 parts silver and 75 parts copper and is issued in two versions, normal quality and proof quality, which differ in surface treatment and edge marking. Proof-quality coins have a highly polished field, a matt relief and a plain edge with the inscription “ČESKÁ NÁRODNÍ BANKA * Ag 0.925 * 25 g *”. Normal quality coins have milled edges. The coin is 40 mm in diameter, weighs 25 g and is 2.65 mm thick. As with any other coins, deviations in diameter of 0.1 mm and thickness of 0.15 mm are allowed. Upward deviations in weight of 0.50 g and silver content of 1% are permitted.

The obverse side of the coin depicts the land emblems of the future Czechoslovakia as a symbol of the fight against the Austro-Hungarian monarchy as represented by the Austrian imperial eagle in heraldic stylisation. Written around the outer circle is the text “ČESKÁ REPUBLIKA” and the denomination and abbreviated monetary unit “500 Kč”. The mark of the Czech Mint, in the form of the letters “Č” and “M”, is located near the right-hand upper edge of the coin. The reverse side of the coin depicts a scene from the battlefield. Written around the upper edge of the coin is the inscription “BITVA U ZBOROVA”, and the years “1917–2017” are situated near the bottom edge. The mark of the designer of the coin Asamat Baltaev is located to the right of the year 2017.