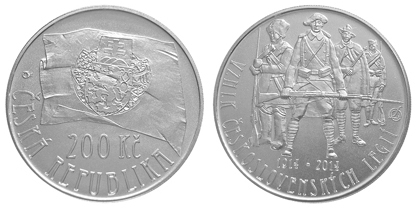 On 6 August 2014 the Czech National Bank is putting into circulation a CZK 200 commemorative silver coin to mark the 100th anniversary of the foundation of the Czechoslovak legions. The coin is minted from an alloy containing 925 parts silver and 75 parts copper and is issued in two versions, normal quality and proof quality, which differ in surface treatment and edge marking. Proof-quality coins have a highly polished field, a matt relief and a plain edge with the inscription in Czech “ČESKÁ NÁRODNÍ BANKA * Ag 0.925 * 13 g *”. Normal quality coins have milled edges. The coin is 31 mm in diameter, weighs 13 g and is 2.35 mm thick. As with any other coins, deviations in diameter of 0.1 mm and thickness of 0.15 mm are allowed. Upward deviations in weight of 0.26 g and silver content of 1% are permitted.

The obverse side of the coin features a banner with the coat of arms of the Czechoslovak legions as used at their recruitment centres. The denomination and abbreviated monetary unit “200 Kč” are below the banner. The name of the state “ČESKÁ REPUBLIKA” is located around the left-hand and lower edge of the coin. The coin was minted by the Czech Mint. Its mark, in the form of the letters “Č” and “M”, is located to the left of the banner. The reverse side of the coin features the figures of four legionnaires – on the left a Russian legionnaire, at the front a French legionnaire, behind him an Italian legionnaire and at the back a Serbian legionnaire. The text “VZNIK ČESKOSLOVENSKÝCH LEGIÍ” is located around the left-hand, lower and right-hand edge of the coin. Below the figure of the French legionnaire are the years “1914 ▫ 2014”. The designer of the coin is Luboš Charvát. His initials, in the form of the interlinked letters “LCH”, are situated near the right-hand edge of the coin below the rifle bayonet. Each coin comes with a green catalogue card containing a description and the relief of the coin.