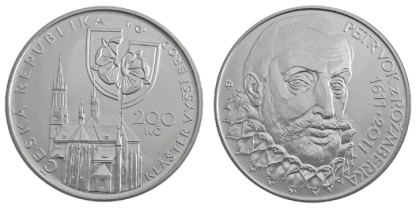 Petr Vok was the last of the line of the Rožmberks, an important aristocratic family. To mark the 400th anniversary of his death, the Czech National Bank is putting into circulation a commemorative silver CZK 200 coin on 19 October 2011.

A total of 21 designers submitted 27 plaster models to the unlimited anonymous competition announced by the CNB in February 2010. The models were assessed by the Commission for the Evaluation of Designs for Czech Banknotes and Coins on 4 May 2010, with Marie Bláhová from the Faculty of Arts at Charles University in Prague as expert adviser for the historical motifs. The design by Jan Hásek won first prize and was recommended for realisation. Second prize was awarded to the design by Jaroslav Bejvl and third prize went to the model by Petr Horák. At its meeting on 27 May 2010, the Bank Board exercised its right to select for realisation a design other than the one awarded first prize by the Commission. It approved for realisation the combination of the obverse side of the design by Jaroslav Bejvl and the reverse side of the design by Petr Horák.

The obverse side of the CZK 200 coin shows the monastery at Vyšší Brod, the final resting place of Petr Vok, which is also symbolised by the broken coat of arms of the Rožmberk family. The name of the state, the name of the monastery, the denomination and the mint mark are added to the composition.
The reverse side of the coin depicts the nobleman in period costume and features his name and the years 1611–2011.

Each coin comes with a white catalogue card with the Rožmberk roses printed in light blue. The card contains a description and the relief of the coin.