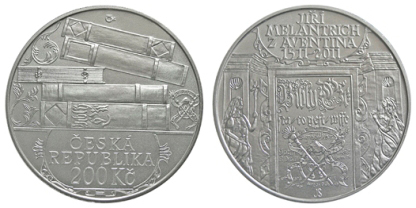 Jiří Melantrich of Aventinum (born Jiřík Černý) was a prominent 16th century printer and publisher. To mark the 500th anniversary of his birth, the Czech National Bank is putting into circulation a CZK 200 commemorative silver coin on 15 June 2011.

A total of 19 designers submitted 28 plaster models to the unlimited anonymous competition announced by the CNB in December 2009. The models were assessed by the Commission for the Evaluation of Designs for Czech Banknotes and Coins on 30 March 2010, with Marie Bláhová from the Faculty of Arts at Charles University in Prague as expert adviser for the historical motifs. The design by Jan Smrž won first prize and was recommended for realisation. Second prize was not awarded and third prize went to the designs by Tereza Eisnerová and Martin Dašek. At its meeting on 15 April 2010 the Bank Board approved the realisation of the coin designed by Jan Smrž.

The Czech Mint struck coins of silver having a fineness of 0.925. Normal quality and proof quality coins differ in surface treatment and edge marking. Proof-quality coins have a highly polished field, a matt relief and a plain edge, while normal-quality coins have milled edges. The coin has a diameter of 31 mm, a weight of 13 g and a thickness of 2.2 mm.

The obverse side of the coin shows a composition of five books with Jiří Melantrich’s signet on the right. The name of the state “ČESKÁ REPUBLIKA” and the denomination and abbreviated monetary unit “200 Kč” are situated in the bottom part of the coin. Ornamental decorations complete the composition. The mark of the Czech Mint is at the upper edge of the coin.

Each coin comes with a grey-brown catalogue card containing a description and the relief of the coin.