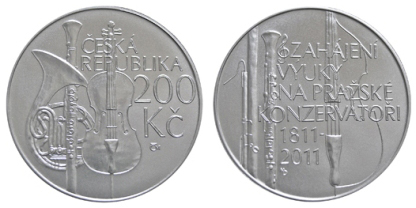 A commemorative silver coin will be issued by the Czech National Bank on 30 March 2011 to mark the anniversary of the commencement of tuition at the Prague Conservatory.

The Czech Mint minted coins of silver having a fineness of 0.925 in normal quality and proof quality, which differ in surface treatment and edge marking. Proof-quality coins have a highly polished field, a matt relief and a plain edge, while normal-quality coins have milled edges. The coin has a diameter of 31 mm, a weight of 13 g and a thickness of 2.35 mm.

The obverse side of the CZK 200 coin shows three musical instruments taught at the Prague Conservatory. On the left is a French horn, in the middle is an oboe and on the right is a cello. The name of the state in Czech “ČESKÁ REPUBLIKA” is located in the upper part of the picture of the cello. The mark of the Czech Mint is located below the abbreviated monetary unit.

The reverse side of the CZK 200 coin features a composition of other musical instruments – a bassoon on the left, an oboe in the middle and a double bass on the right. The mark of Martin Dašek, the designer of the coin, is located below the year “2011”.

Each coin comes with a beige catalogue card containing a description and the relief of the coin.