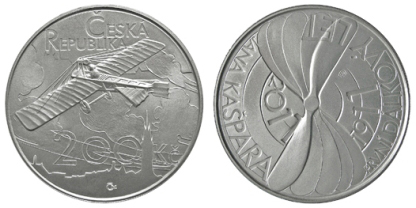 On 13 May 1911 Jan Kašpar undertook his first long-distance flight from Pardubice to Prague. To mark the 100th anniversary of this event, the CNB will issue a CZK 200 commemorative silver coin on 27 April 2011.

The design of the coin was selected in an unlimited anonymous competition, for which 24 designers submitted a total of 35 plaster models. The models were assessed by the Commission for the Evaluation of Designs for Czech Banknotes and Coins, with Karel Zeithammer as expert adviser. The design by Josef Šafařík won the first prize and was recommended for realisation. Second prize was awarded to the design by Jan Hásek and third prize went to the model by Tereza Eisnerová. At its meeting in May 2010 the Bank Board approved the realisation of the coin designed by Josef Šafařík.

The Czech Mint minted coins of silver having a fineness of 0.925 in normal quality and proof quality, which differ in surface treatment and edge marking. Proof-quality coins have a highly polished field, a matt relief and a plain edge, while normal-quality coins have milled edges. The coin has a diameter of 31 mm, a weight of 13 g and a thickness of 2.35 mm.

The reverse side of the CZK 200 coin features an aeroplane propeller in phased motion. The text “PRVNÍ DÁLKOVÝ LET JANA KAŠPARA” is written in negative letters around the outer circle. The years 1911 and 2011 (also in negative letters) are situated between the text and the propeller. The initials of the designer of the coin, Josef Šafařík, are located below the right part of the propeller.

Each coin comes with a blue catalogue card containing a description and the relief of the coin.