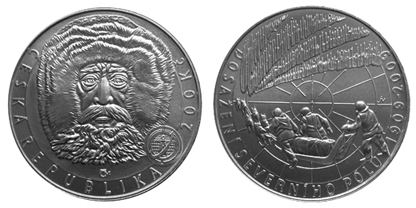 On 4 March 2009, the Czech National Bank puts into circulation a commemorative silver 200 Kč coin to mark the 100th anniversary of the reaching of the North Pole by Arctic explorer Robert Peary. The 200 Kč coin is minted from alloy containing 900 parts silver and 100 parts copper and is issued in two quality versions, in normal quality and proof quality, which differ in surface finish and edge marking. Proof quality coins have a highly polished field and a matt relief, the edge is plain with a frieze “CZECH NATIONAL BANK* Ag 0.900 * 13 g *”. Normal quality coins have milled edges. The coin is 31 mm in diameter, weighs 13 g and is 2.35 mm thick. As with any other coins, deviations in diameter of 0.1 mm and thickness of 0.15 mm are allowed. Upward deviations in weight of 0.26 g and the silver content of 1% are allowed.

The obverse of the coin features the portrait of Arctic explorer Robert Peary. The name of the state “ČESKÁ REPUBLIKA” and the denomination and abbreviated monetary unit “200 Kč” are written around the ring. The logo of the International Polar Year is situated between the name of the state and the denomination of the coin. The mark of the Czech Mint is located below the portrait of the Arctic explorer. The reverse of the 200 coin features a symbolic image of the North Pole and an Arctic expedition with dogs above which is an aurora. Written on the ring is an unclosed text “REACHING OF THE NORTH POLE “ and the years “1909 – 2009”. The initials of the designer of the coin, the sculptor Jiří Vaněček, made up of linked letters “JV” are located between the figure of the first Arctic explorer and the years.

Each coin comes with a grey blue-printed postcard-sized catalogue card. The relief of the coin is dry-stamped through silver foil. The text is given in Czech and English. The card is the same for the normal-quality and proof-quality coins.