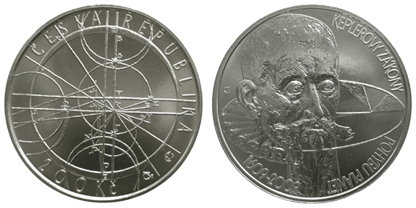 On 21 October 2009, the Czech National Bank is putting into circulation a CZK 200 silver commemorative coin to mark the 400th anniversary of the formulation of the Kepler´ s laws of planetary motion. The CZK 200 coin is struck from the alloy containing 900 portions of silver and 100 portions of copper and is minted in two versions, normal and proof – differing in surface treatment and edge marking. The proof-quality coins have highly polished fields, matt reliefs and plain edges with the inscription in Czech “ČESKÁ NÁRODNÍ BANKA *Ag 0.900 * 13 g*.The normal-quality coins have milled edges. The coin has a diameter of 31 mm, a weight of 13 g and a thickness of 2.3 mm. As with any other coins, deviations in diameter of 0.1 mm and thickness of 0.15 mm are allowed. Upward deviations in weight of 0.26 g and the silver content of 1% are allowed.

The obverse side of the CZK 200 coin depicts the drawing of the orbit of Mars coming from the Johann Kepler´s book “Astronomia Nova”. The name of the state “ČESKÁ REPUBLIKA” is located around the left-hand, upper and right-hand, bottom edge of the coin. The bottom edge of the coin bears the denomination and abbreviated monetary unit “200 kč”. Placed between the name of the state and the denomination value of the coin is the mark of the Czech Mint, which minted the coin and a logo of the Europa project, within the framework of which the CZK 200 coin is issued. The reverse side of the coin features the portrait of Johan Kepler on the background of the illustration of the law of areas. The inscription in Czech of “ KEPLEROVY ZÁKONY POHYBU PLANET“ is positioned at the right-hand edge of the coin. Written around the left-hand, bottom edge of the coin are the years “1609 – 2009”, whose figures “09” are partly overlapping the beard of the portrait.  The initial of the designer of the coin, Vojtěch Dostál - created by the reversed letter “D”- is placed at the left-hand edge of the coin, next to Johan Kepler´ s portrait.

Each coin comes with a blue postcard-sized catalogue card. The relief of the coin is dry-stamped through silver foil. The text is given in Czech and English. The card is the same for the normal-quality and proof-quality coins.