The shadow banking system has become an important funding source for the real economy over the last two decades. In 2018, its total assets amounted to almost EUR 41.9 trillion in EU countries and EUR 34.5 trillion in euro area countries, accounting for more than 40% of the assets of the financial sector as a whole (ESRB, 2019). Total shadow banking assets more than doubled between 2000 and 2008, and similar growth can be observed in 2009–2018 (see Chart 1). Shadow banks are financial intermediaries that conduct maturity, credit and liquidity transformation without access to central bank liquidity or public sector guarantees. This is a very simplified broad definition of shadow banking[1]. A classification and an overview of the definitions can be found in Hodula (2018). In this context, the European Systemic Risk Board, for example, defines shadow banking as the sum of the assets of investment funds, money market funds and other financial intermediaries, such as corporations engaged in leasing, factoring or hire purchase. 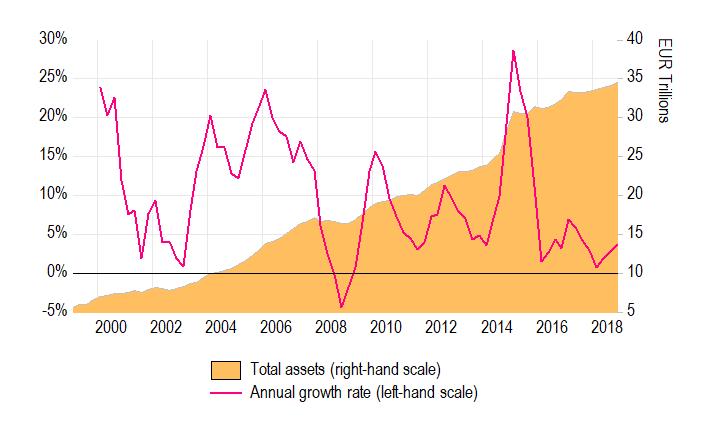 In two papers of mine published on the CNB’s research papers webpage, I focus on analysing the main factors that have contributed to the growth in shadow banking in EU countries and on the relationship between the ECB’s monetary policy and shadow banking in euro area countries[2].

The first paper shows that the growth in shadow banking in EU countries is associated mainly with growth in the real economy and growth in the assets of insurance corporations and pension funds[3]. The first relationship suggests that shadow banking, like traditional banking, tends to be procyclical, booming in good times and falling steeply in bad times. This is a challenge for regulatory and supervisory institutions safeguarding financial stability. The procyclical effect of shadow banking is manifested mainly in the provision of short-term liquidity to financial markets at times of market optimism. Nevertheless, this may halt in periods of increasing uncertainty, fostering a sharp rise in market vulnerabilities. The other relationship suggests that shadow banking entities, insurance corporations and pension funds are highly interconnected at the EU level. For example, besides providing traditional insurance services, some insurance corporations may also enter into derivative transactions or underwrite collateralised debt obligations to invest their cash. Some pension funds invest in securities issued in securitisation processes, such as asset-backed securities and collateralised debt obligations. The paper also points to differences in shadow banking between new and old EU countries. Chart 2 shows that in the old member states, there is a strong regulatory arbitrage incentive, which is a result of strict regulation of traditional banking (see “Strictness of banking regulation” in Chart 2). Finally, the paper shows that some shadow banking entities may serve as substitutes for traditional banking products (e.g. entities providing financial leasing and hire purchase services and products of investment funds), while others serve as complements (entities engaged in securitisation). 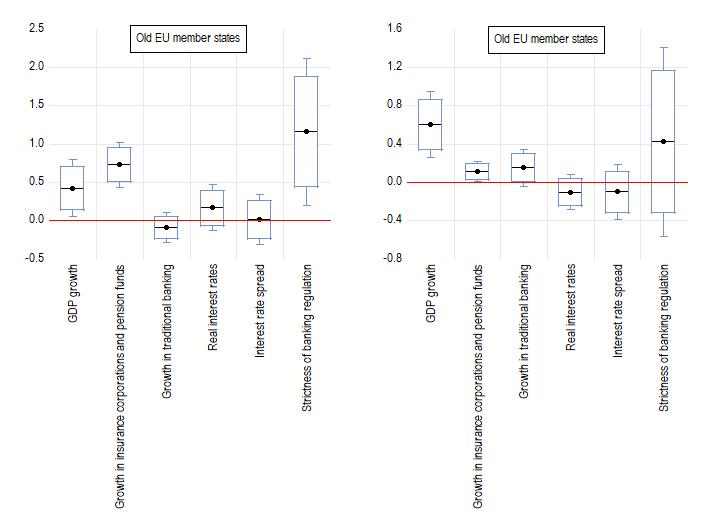 Note: The mean (the black line with the dot) represents the estimated coefficients for the individual variables. The box with lines going vertically upward and downward from the central part represents the 95% confidence interval. The full estimation results are shown in Table 2 in the related paper.

Note: TB = traditional banking; SB = shadow banking; OFIs = other financial intermediaries, IFs = investment funds. The mean (the black line with the dot) represents the estimated coefficients for the individual variables. The box with lines going vertically upward and downward from the central part represents the 95% confidence interval. The full estimation results are shown in Tables 2 and 4 in the related paper.

The two papers’ findings have wider implications for the current debate on the relationship between financial stability and monetary policy. The procyclicality of shadow banking may influence the discussion about macroprudential policy. The increasing importance of shadow banking may to some extent limit the effectiveness of banking regulation tools. The strong link identified between shadow banking and pension funds and insurance corporations points to a need to create a framework for testing the interconnectedness of financial institutions at the EU level. The findings regarding the relationship between monetary policy actions and shadow banking complement the debate on the role of monetary policy in maintaining price and financial stability. The empirical findings indicate that there is a search for yield channel through which monetary policy may influence the stability of the financial system, a channel that other studies also draw attention to (Jiménez et al., 2014; Maddaloni and Peydró, 2011; Borio and Zhu, 2012). The papers’ findings thus support the existing literature recommending coordination between monetary policymakers, regulatory and supervisory institutions and macroprudential authorities (for more, see, for example, Frait and Malovaná, 2017).

[2] The share of shadow banking in total financial sector assets in the Czech Republic is currently very low compared with Western economies (about 20% at the end of 2018).

[3] Assets of insurance corporations and pension funds are generally not considered to be part of shadow banking, as these entities are regulated and supervised to a greater extent (OECD, 2015).